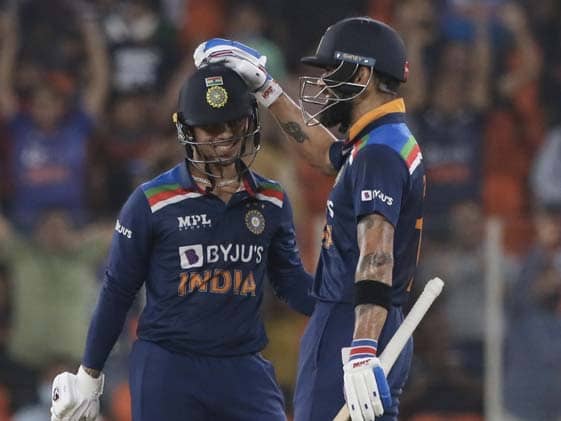 
India captain Virat Kohli called debutant Ishan Kishan “a fearless character” after the latter’s whirlwind 56 off just 32 balls helped India beat England by seven wickets in the second T20I against England in Ahmedabad on Sunday. Kohli, who himself smashed 73 off just 49 balls and became the first player in men’s cricket to reach 3000 T20I runs, praised Kishan for his calculated strokes. “Special mention to Ishan the way he batted. I tried to do what I can but he kept following his instincts and it was a quality innings on debut,” Kohli said after the match.

“He is a fearless character & should continue to back his instincts.”

“When you play in the IPL with such dominance like he has… He is a fearless character and he knew that he was hitting the ball well. He is very calculated and not restless,” Kohli added.

Together, Kohli and Kishan added 94 runs for the second wicket in just nine overs as India made short-work of England’s total of 164 and won with more than two overs to spare.

“Today that counterattacking innings from him and that partnership was needed,” Kohli said of his partnership with Kishan.

After restricting England to a sub-par total, Kishan attacked from the start of the innings even as he lost his opening partner KL Rahul for a duck.

Kishan was one of the two debutants for India in this match. Suryakumar Yadav also made his debut on Sunday.