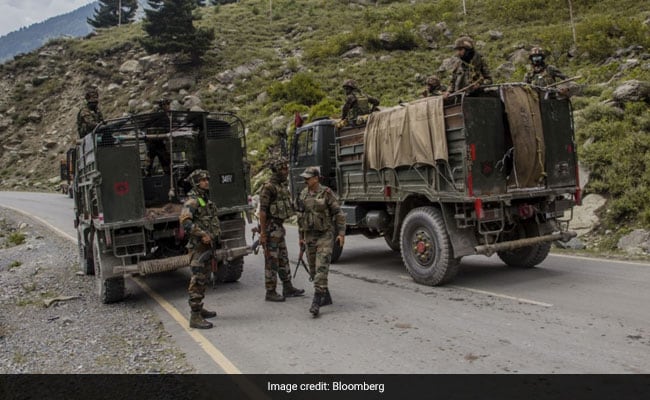 Indian army convoy drive towards Leh, on a highway bordering China, on September 2.

Indian officials say China is assisting rebel groups that have stepped up attacks on its border with Myanmar in recent months, opening another front in the conflict between two nations already engaged in a deadly standoff in the Himalayas.

Armed groups in Myanmar — including the United Wa State Army and the Arakan Army, which was designated a terrorist organization this year — are acting as Beijing’s proxies by supplying weapons and providing hideouts to insurgent groups in India’s northeastern states, according to Indian officials with knowledge of the situation, who asked not to be identified due to rules for speaking with the media.

The officials said multiple security agencies warned Prime Minister Narendra Modi’s government that at least four of India’s most wanted insurgent leaders were in the southern Chinese city of Kunming to train and source weapons as recently as mid-October. The group — including three ethnic Naga rebels fighting for a separate homeland in an area straddling the India-Myanmar border — met with acting and retired Chinese military officials as well as other middlemen who make up an informal network, the Indian officials said.

The increased activity along the Myanmar border has sparked concern in New Delhi that India’s military is becoming stretched as tensions remain with China and Pakistan on other parts of its land border, which runs for roughly 14,000 kilometers (8,700 miles). The officials said India moved several battalions consisting of about 1,000 troops each into the Myanmar border area after a soldier was killed in an ambush on Oct. 21.

China’s Foreign Ministry denied claims the country was supporting armed groups against India, saying it doesn’t interfere in the affairs of other countries. “China has always taken a prudent and responsible attitude toward arms exports,” the ministry said in written responses to questions. “We only conduct military trade in cooperation with sovereign states and do not sell arms to non-state actors.”

The United Wa State Army also denied a role in providing any aid or support to Indian rebel groups on China’s behalf, citing, among other factors, the over 500 miles between their headquarters and the India-Myanmar border.

The group doesn’t “have any connection with India’s national security, and we do not harm that country at all. So, we think we don’t need to comment on such kind of allegations,” Nyi Rang, the spokesman of United Wa State Army said, adding that accusation his group acts as a proxy for China “are groundless.”

Indian officials said the recent upsurge in violence stems back to September, when Naga insurgents had walked away from decades-long peace negotiations. On Sept. 28, Indian border guards intercepted a large cache of weapons meant for Indian insurgent groups along the India-Myanmar border and arrested three suspected gun runners, according to officials with direct knowledge of the matter.

The New Delhi officials said those arrested explained that Indian insurgents were being supplied weapons by the Arakan Army, which in turn received China’s support to protect investments such as roads and gas pipelines in an economic corridor stretching from Sittwe port to Kunming. China was also helping Indian rebels with weapons and logistics including hideouts along the India-Myanmar border, the officials noted.

Calls and WhatsApp messages to Ministry of Home Affairs requesting comment went unanswered. Repeated efforts to contact senior members of the National Socialist Council of Nagaland, whose leaders were believed to have been in Kunming, were unsuccessful.

Several dozen armed militias are active in India’s northeast, fighting for independence or greater autonomy. Asked by reporters on Nov. 6 whether China was using armed ethnic groups in Myanmar to support rebels, a senior Home Ministry official declined to answer directly. “Some of the insurgent groups are troublemakers, but we are negotiating peace with others,” Ajay Bhalla, the Home Ministry’s top bureaucrat, said at a webinar hosted by the National Defence College.

Army chief arrived in Nagaland on Nov. 24 for a three-day visit, underscoring the renewed intensity of the conflict. In late October, Indian and Myanmar troops launched joint operations targeting Indian rebel groups, including one named the People’s Liberation Army of Manipur. Myanmar’s military, meanwhile, has targeting armed ethnic groups like the Arakan Army on its side of the border.

As armed ethnic insurgencies erupted across India’s remote northeast states in the 1950s and 1960s, it was bitter rival Pakistan that first supplied the armed groups with weapons. Soon, however, “it was China that became the main provider of munitions for the ethnic insurgents. Many were also trained in China,” Swedish journalist and regional expert Bertil Lintner wrote in his 2012 book “The Great Game East: India, China and the Struggle for Asia’s Most Volatile Frontier,” adding that “today, the Chinese government does not openly support those groups, but they have had access to the so-called black – in reality more gray – arms market in China.”

China is unlikely to use a third country to pressure India because that would prompt leaders in New Delhi to do the same in return, according to Fan Hongwei, a professor at the Research School of Southeast Asian Studies at Xiamen University.

“China would hope to resolve bilateral issues between the two countries, rather than make it more complex, which would not keep with China’s consistent policy and interests,” he said.

Both India and China are investing in Myanmar for strategic reasons. Beijing is investing in gas pipelines and roads to link its southern province of Yunnan with the Bay of Bengal, allowing for key imports to bypass the Malacca Strait between Malaysia, Indonesia and Singapore. India, meanwhile, is investing in the 29 billion rupee ($292 million) Kaladan Multimodal project to connect its underdeveloped northeastern states to the Bay of Bengal.

“China knows that the region is crucial to India’s future connectivity into Southeast Asia,” said Ian Hall, professor of international relations at Griffith University in Queensland, Australia, and author of ‘Modi and the Reinvention of Indian Foreign Policy.’ “It knows too that securing the region is challenging and has been very costly to New Delhi in the past.”