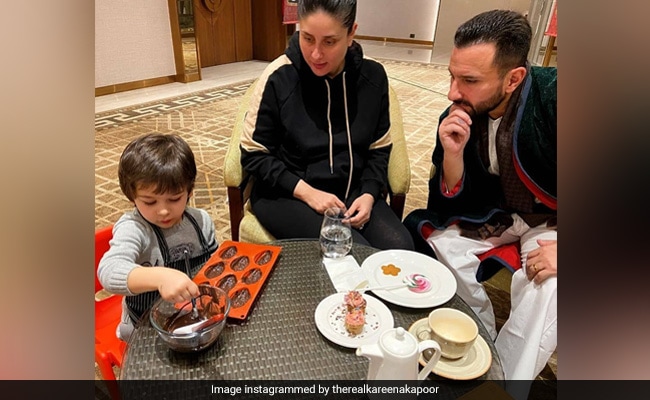 Saif Ali Khan might be a social media recluse but thanks to many fan clubs, we got a glimpse of what the actor was upto in Dharamshala (Himachal Pradesh), where he is shooting for his film Bhoot Police. We chanced upon pictures from a culinary session, which also featured his wife Kareena Kapoor and their son Taimur. To be precise, the pictures happen to be from an “exclusive culinary session with master Taimur.” The pictures were originally shared by the hotel where Kareena and Saif are currently staying at, and were later curated by several fan clubs. In the pictures, Kareena and Saif can be seen accompanying Taimur.

Kareena Kapoor flew to Himachal Pradesh along with her bestie Malaika Arora a few weeks ago. She celebrated Diwali along with her husband Saif Ali Khan, who is shooting for his film Bhoot Police along with Arjun Kapoor and Jacqueline Fernandez. Here are some posts Kareena Kapoor shared from Dharamshala:

Kareena Kapoor and Saif Ali Khan shared the big news of their pregnancy in August, this year. “We are very pleased to announce that we are expecting an addition to our family. Thank you to all our well-wishers for all their love and support,” the couple said in a joint statement. The couple got married in the year 2012 and welcomed their first child Taimur Ali Khan in 2016.

Kareena was last seen in the hit film Angrezi Medium, co-starring late actor Irrfan Khan and Radhika Madan. The actress’ upcoming projects include Karan Johar’s period drama Takht and Aamir Khan’s Laal Singh Chaddha, which is a remake of the 1994 film Forrest Gump. She also wrapped the shooting of her chat show What Women Want season 3.