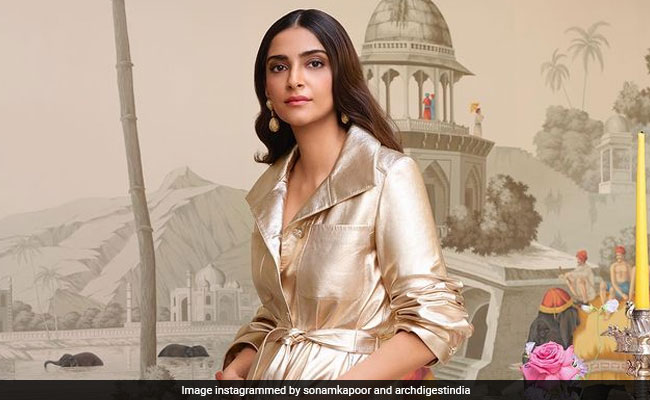 Sonam Kapoor, who opened the doors of her London apartment to Architectural Digest magazine for their September-October issue, also gave a virtual tour of her flat in photos she shared on Instagram. Sonam Kapoor wrote she wanted a home with an eclectic feel with connections to her Indian roots and Interior designer Rooshad Shrooff helped her achieve just that. She also wanted “a more outdoor feel on the inside, rich in greens, blues and jewel tones,” which explains the elaborate wall motif in the living room. Sonam Kapoor’s drawing space also has a few stunning décor pieces handed down to her by Anand Ahuja’s mom – the silver elephants on the center table. In her post, Sonam explained: “The first time Anand Ahuja and I stepped foot into our flat it instantly felt like home! It’s a two and a half bedroom space nestled in Notting Hill, and perfect for where we are in our lives at present.”

Sonam Kapoor’s home is a vibrant mix of colours, textures and motifs with very prominent traditional Indian elements and modern drama. Here are some glimpses of Sonam Kapoor’s two-and-a-half bedroom flat in London’s Notting Hill, including a tour of her bedroom.

Sharing a few more snippets from their London home, Anand Ahuja wrote: “It’s not ‘Falling in Love’, it’s ‘RISING in Love’. Thanks for our home, Sonam Kapoor.”

Sonam Kapoor and Anand Ahuja got married in May 2018 and have been shuttling between India and London ever since. Back home in India, while Sonam lives in Mumbai’s Juhu, Anand Ahuja’s family home is in Delhi. Anand Ahuja owns the sneaker store VegNonVeg, which has outlets in both Mumbai and Delhi. He is also the founder of clothing bran Bhaane.