Instagram seems to have blocked the hashtag #sikh on its platform for a short period of time, some users have complained on Twitter. The blocking comes just over five months after Facebook and Instagram were seen restricting the #sikh hashtag for a number of users. Instagram at that time responded to user complaints and stated that the said hashtag was “mistakenly blocked” in early March.

As per the user reports, the #sikh hashtag isn’t searchable on Instagram. Some users have also reported that the blocking is in place on Facebook as well.

Seems like the #Sikh hashtag is not searchable again on @instagram, but it does seem to show me one article about Hindu and Sikh Refugees in India returning to Pakistan due to financial hardships and no progress on Indian citizenship ????????‍♂️ pic.twitter.com/gOe0k3s9Ad

Instagram has blocked the #Sikh hashtag yet again saying recent posts were low quality/did not meet the community guidelines aka they don’t want to make the ultranationalists in India upset. Same thing happened months back, plus they’ve censored thousands of sikh accounts on FB.

Gadgets 360 was able to independently verify the user reports about the blocking of the #sikh hashtag. The app was initially showing a “posts hidden” error that read, “To make sure only the most relevant posts are shown, we’ve hidden some posts that may be private or low quality.” However, shortly after it was raised by some users, Instagram started showing a handful of posts. 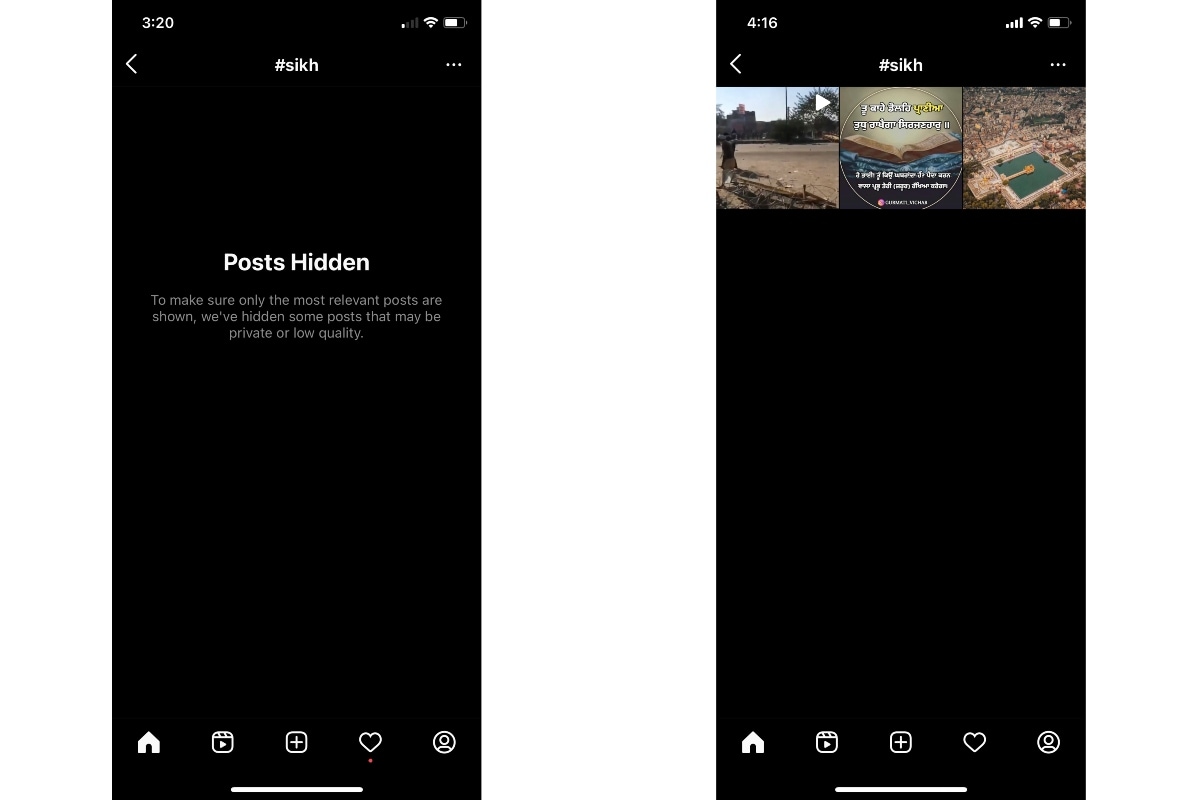 Searching for the #sikh hashtag on Instagram showed that there were over 2.5 million posts on the platform with the same hashtag.

Update: A Facebook spokesperson responded to Gadgets 360 to say that the the #sikh hashtag was temporarily blocked because of reports from the community for violations its Community Guidelines; and confirmed that the hashtag has now been unlocked.

In June, Facebook and Instagram were spotted blocking the #sikh hashtag on their platforms. It was unblocked shortly after several users reported the issue on social media. Instagram also apologised for the action and stated that the hashtag was “mistakenly blocked” on March 7 after receiving a report that “was inaccurately reviewed” by its teams.

“Our processes fell down here, and we’re sorry,” Instagram had said.

Update: The full statement from the Facebook spokesperson is shown below.

The #sikh hashtag was temporarily blocked because of multiple reports from the community for violations of our Community Guidelines. It has now been unblocked.

Should the government explain why Chinese apps were banned? We discussed this on Orbital, our weekly technology podcast, which you can subscribe to via Apple Podcasts, Google Podcasts, or RSS, download the episode, or just hit the play button below.