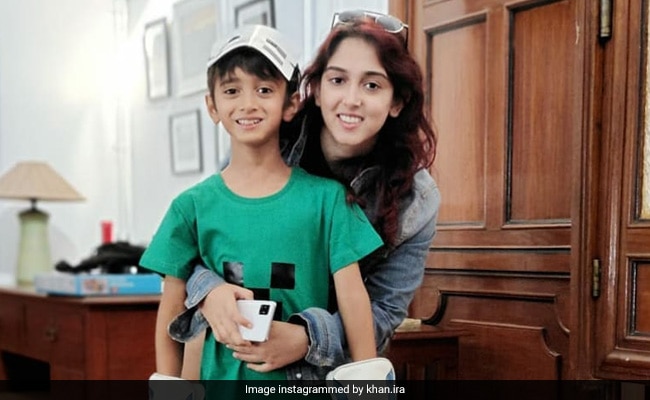 Aamir Khan’s daughter Ira posted pictures from her little brother Azad’s 9th birthday party. BTW, the theme for Azad’s birthday party this was inspired by the popular video game series Minecraft. Ira posted a set of pictures on her Instagram profile on Wednesday. In one of the photographs, she can be seen happily posing with the birthday boy, while the other pictures feature the birthday boy posing with his special cake. Ira chose the best set of words to wish Azad on his birthday and she wrote: “Cutttiiieeepaaatoootttiiieee! Happy Birthday to the coolest baby brother I could have asked for.” She added the hashtags #happybirthday, #birthdayboy, #minecraft, #forcedloved and #stealhugs to her post.

Take a look at Ira Khan’s post here, you can thank us later:

Azad frequently makes appearances on Ira Khan’s Instagram profile. On Diwali, Ira posted super cute pictures featuring her little brother and she captioned the post: “Roasting marshmallows is an art. Just like taking pictures in the dark. However, that I have not yet figured out. Happy Diwali.” ICYMI, this is the post we are talking about:

Ira is the younger of Aamir Khan’s two children with his first wife Reena Dutta. Ira has studied music, while her brother Junaid often assists his father in filmmaking. Ira made her directorial debut with a theatrical adaptation of Euripides’ Medea, which starred Hazel Keech in the titular role. Aamir Khan is now married to filmmaker Kiran Rao and the couple are parents to a son named Azad.