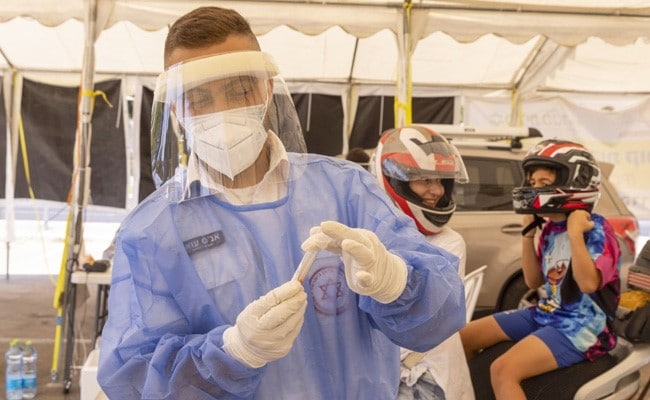 Coronavirus: As of September 6, around 28% of Israel’s population have got booster shots.

Israel, once a front-runner in the global race to move on from Covid-19, is now one of the world’s biggest pandemic hot spots.

The country that was once predicted to be the first to vaccinate its entire population had the highest per-capita caseload of anywhere in the week through Sept. 4, according to figures compiled by Johns Hopkins University. Its world-beating inoculation rate, meanwhile, has tumbled down the league table.

The nation of 9 million became the test case for reopening society and the economy in April when much of Europe and the U.S. were still in some form of lockdown. Yet Israel now shows how the calculus is changing in places where progress was fastest. It’s no longer just about whether people get coronavirus, but also how badly they get it and ensuring that vaccines are still working as the highly infectious Delta variant threatens to undermine immunity.

More recently, it has led the way when it comes to vaccinating children and rolling out a booster shot of the Pfizer-BioNTech vaccine after research suggested reduced efficacy over time. Around 100,000 Israelis are getting inoculated every day, the vast majority of them with a third shot.

“If you are able to maintain life without lockdown, and to avoid very high numbers of hospitalizations and death, then this is what life with Covid looks like,” said Eyal Leshem, a professor specializing in infectious diseases at the Sheba Medical Center in Tel Ha-Shomer.

Since April, Israel has fallen from first to 33rd in Bloomberg’s vaccine tracker of populations considered fully vaccinated. The program plateaued amid hesitancy from some in the Orthodox Jewish and Arab communities. About 61% of Israelis have been given two doses, lower than in European laggards earlier in the year such as France and Spain.

Following the spread of the Delta variant over the summer, Israel has seen cases climb, reaching an all-time high of 11,316 daily cases on Sept. 2. The number of people falling seriously sick and being hospitalized, though, has risen less than it did during the last coronavirus wave, peaking at 751 in late August, compared with 1,183 in mid-January. The trend is now downward.

Infections jumped because of the prevalence of cases among the unvaccinated, especially children. There were also so-called breakthrough infections in those who have been vaccinated, and the drop in efficacy of vaccines. 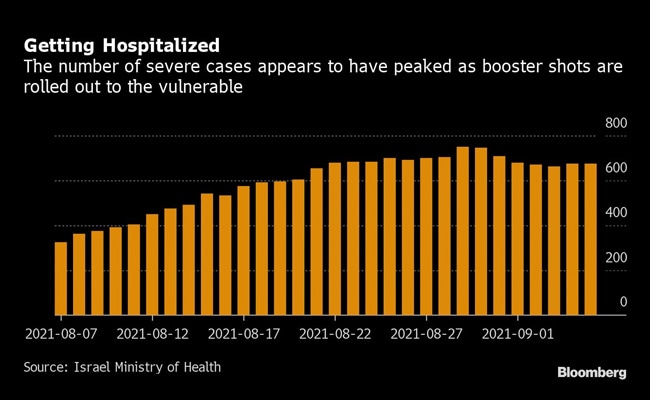 Infections jumped in Israel because of the prevalence of cases among the unvaccinated.

That said, unvaccinated people account for more than 10 times as many serious cases as those who have received two doses, showing that even with immunity waning, shots are providing protection.

For public health officials and politicians, the latest chapter of the pandemic is to concentrate on ensuring older people more at risk continue to be protected while cases are rising among children. The importance of that drive is heightened by the return of millions of children to schools last week, and the Jewish New Year this week.

Epidemiologists say cases among the over 30s are already declining thanks to the boosters and restrictions on bars and restaurants to the fully vaccinated. The highest rate of new cases in recent weeks is among children under the age of 12, according to Ran Balicer, chair of the expert advisory panel to the government. There’s also a record level of testing.

“Waning immunity is a real challenge that every country needs to prepare a contingency plan to tackle,” said Balicer, who is also chief innovation officer for Israeli health maintenance organization Clalit. The data coming from Israel in the coming weeks will allow the world to assess the efficacy of the booster shot program, he said.

As of Sept. 6, at least 2.6 million people in Israelaround 28% of the populationhave now had the booster shot of the Pfizer-BioNTech vaccine, according to the Israeli Health Ministry. That rises to at least 64% for people in age brackets over 60. Significantly, the booster shot is also available for anyone over 12 who was vaccinated at least five months ago.

The wildcard is the return of schools. That could change the transmission dynamics and expose all age groups to infection because of kids coming home with Covid-19, Balicer said.

The World Health Organization’s heat map puts Israel in the top five in the wider European region. The rolling data show areas with the highest seven-day infection rates are in Scotland, where 68% of the population are fully vaccinated. Cases surged after restrictions were lifted and then schools returned from their summer break in mid-August.

“If we look back a year ago, we virtually had no protection other than a complete lockdown,” said Leshem. “Now, we have an open education system, fully open commerce, and despite over 50,000 cases a week, we are not seeing increases in the number of severe cases and hospitalization.”