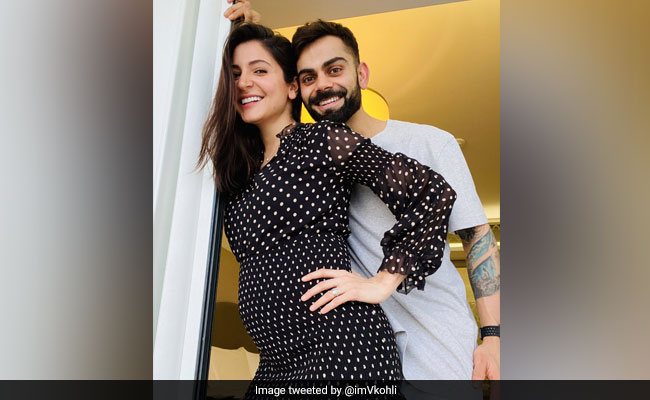 Anushka Sharma and Virat Kohli got married in 2017. (courtesy imvkohli)

Actress Anushka Sharma and cricketer Virat Kohli welcomed a daughter, their first child today. Virat made the announcement on Twitter – mother and baby are both doing well, he wrote and signed off with a request for privacy. Virat tweeted: “We are thrilled to share with you that we have been blessed with a baby girl this afternoon. We thank you all for your love, prayers and good wishes. Anushka and the baby are both healthy and we are feeling beyond blessed to start this new chapter of our lives. We hope that you can respect our privacy at this time.” See Virat Kohli’s post here:

Anushka Sharma and Virat Kohli, married since 2017, announced last August that they were expecting a baby. They wrote on their respective social media accounts, “And then we were three! Arriving Jan 2021.” Congratulatory messages flooded their posts instantly – many of these were from the couple’s celeb friends such as Priyanka Chopra, Alia Bhatt, Varun Dhawan, Sania Mirza, Kiara Advani, Samantha Ruth Prabhu, Taapsee Pannu, Dia Mirza and Parineeti Chopra. See Anushka and Virat’s post here:

And then, we were three! Arriving Jan 2021 pic.twitter.com/iWANZ4cPdD

Virat Kohli, the captain of India’s cricket team, was granted paternity leave by the Board of Cricket Control in India or BCCI and flew home from Australia towards the end of December after playing the first of a four-match Test series. In his absence, the team is being captained by Ajinkya Rahane.

In December, Anushka Sharma discussed parenting in an interview, saying that she and Virat Kohli did not want to “raise brats.” Speaking to Vogue magazine, Anushka said, “There are so many similarities in the way we are as people and the way we approach life. So I do think that will work for us. I’ve been thinking about it before I even became a parent. Conditioning is the most important role in how we see the world. I come from a progressive background, so that will always be a part of our home. Love is the underlying factor in our home, and what’s important to us is that our child be respectful of people. You have to create that value structure. We don’t want to raise brats.”

Anushka Sharma and Virat Kohli, both 32, dated for several years before marrying in Italy in 2017. In 2014, Anushka said, “We are not hiding anything. We are two normal young people in a relationship.” Three years later, they jetted off to Tuscany for a family-and-friends-only wedding, which they followed up with two wedding receptions back home – one in New Delhi and another in Mumbai.

Anushka Sharma, star of films such as PK, Band Baaja Baaraat, Dil Dhadakne Do, Sultan and Ae Dil Hai Mushkil, was last seen in Zero with Shah Rukh Khan and Katrina Kaif. She also produced the critically acclaimed web-series Paatal Lok and Netflix film Bulbbul. Anushka’s production house, Clean Slate Filmz which she runs with brother Karnesh, has also made several films that she’s starred in – NH10 and Pari, among them.