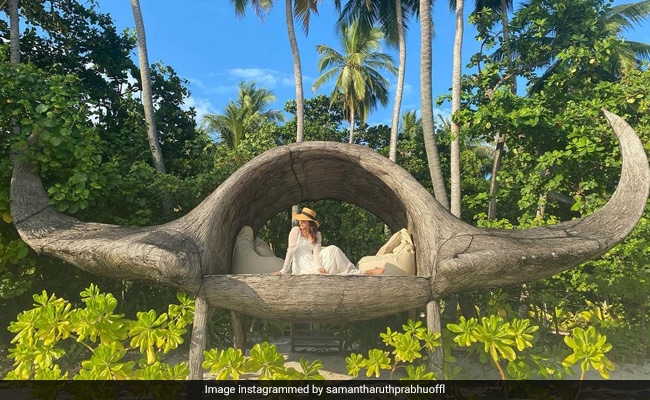 Samantha Ruth Prabhu, who checked into Maldives a few days ago, has actively been sharing pictures from her vacation, where she has been accompanied by her husband and actor Naga Chaitanya. Samantha, on Saturday, added more stunning pictures to her vacation album. Posting a picture from the blue waters of Maldives, she hilariously captioned her post: “No ‘biggini shoot’ … That’s all folks.” She also posted a picture of herself in a white outfit and she wrote: “#nofilter #bluesandgreens.” The comments sections of the actress’ Instagram posts were filled with heart emojis from her fans.

Pictures from Samantha’s Maldives vacation will turn you green with envy. Here are some of the posts shared by her:

Samantha married Naga Chaitanya in 2017. Samantha Ruth Prabhu and Naga Chaitanya are co-stars of films like Manam, Ye Maaya Chesave and Autonagar Surya. The couple had two weddings – one in accordance with South India rituals preceded by a Christian wedding. On Naga Chaitanya’s 34th birthday, the actress posted a picture of him from Maldives and she wrote: “Always living life on your own terms… Wishing you only happiness always and forever.”

Samantha Ruth Prabhu has starred in films such as Ye Maaya Chesave, Rangasthalam, Neethaane En Ponvasantham, Yeto Vellipoyindhi Manasu, Seethamma Vakitlo Sirimalle Chettu and others. The actress had multiple releases last year, which included the Telugu film Majili (in which she co-starred with her husband Naga Chaitanya), Jaanu and Oh! Baby. She will next be seen in Kaathuvaakula Rendu Kaadhal.