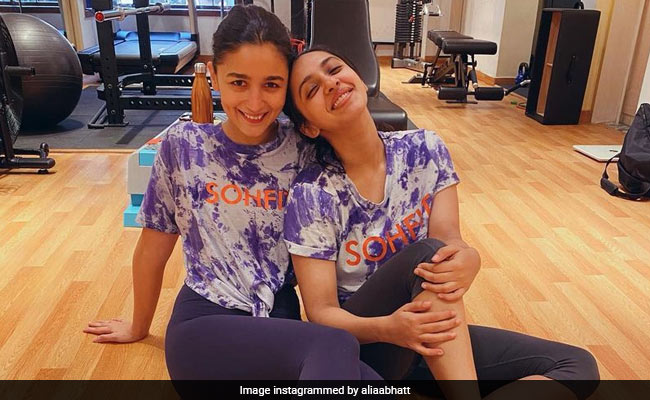 Seen Alia Bhatt’s latest entry on Instagram yet? It’s adorable! The actress, on Tuesday, shared a picture of herself and her BFF, actress Akansha Ranjan Kapoor, from their gym diaries. In the photos, the actress can be seen sitting on the floor at Sohfit gym, owned by her trainer Sohrab Khushrushahi. In the post, both Alia Bhatt and Akansha Ranjan Kapoor can be seen smiling. Sharing the picture, Alia captioned it a bit differently. She wrote: “Feeling soh-cute and perhaps so soh-not-funny.” Alia’s fans loved her smile in the photograph. “Cute,” commented one of the users while another wrote: “love your smile.”

Alia Bhatt and Akansha Ranjan Kapoor are childhood friends. On the latter’s birthday, Alia picked a photo featuring pint-sized versions of herself, Akansha and her sister Anushka Ranjan Kapoor playing together and wrote: “Happy birthday, my life.”

Alia Bhatt’s Instagram feed is filled with pictures of Akansha Ranjan Kapoor. Remember this throwback picture of the besties from their childhood?

Alia Bhatt, who was last seen in Mahesh Bhatt’s Sadak 2, is currently filming Brahmastra. She will share screen space with boyfriend Ranbir Kapoor and Amitabh Bachchan in the film. The actress will also be seen in SS Rajamouli’s RRR, co-starring Jr NTR and Ram Charan. She will soon start the shooting for RRR. Alia Bhatt also has Sanjay Leela Bhansali’s Gangubai Kathiawadi.