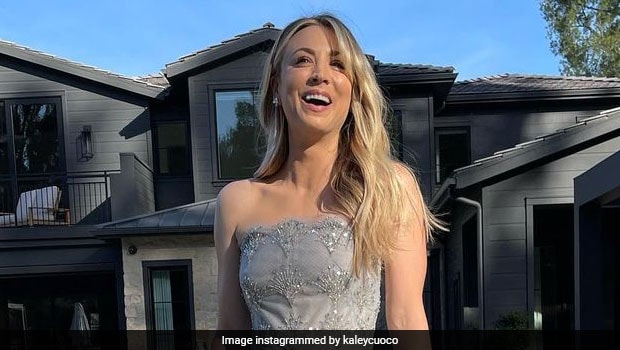 The 78th Golden Globes 2021 award ceremony was held on 28th February, with attendees tuning in virtually from all over the world. There were a number of wins and losses at the ceremony, and plenty of first-time nominations too. One among the first-time nominees was Kaley Cuoco. She was nominated in the Best Actress category for her role in the hit television series ‘Flight Attendant’. She looked absolutely stunning, donning a beautiful Oscar de la Renta gown for the virtual ceremony. Although the ‘Big Bang Theory’ actor did not win the award, Kaley Cuoco went on to enjoy the night nevertheless with some delicious comfort food. Take a look:

“I would like to thank…never mind,” she wrote in the caption of the post. In the picture, we could see Kaley Cuoco seated on the floor of her home; with a bottle of champagne in one hand and a slice of pizza in another. We could see how the actress had kicked back her heels to just let her hair down and indulge in some ooeey-gooey comfort food. Among the other dishes that we could spot in the click were a classic mac-n-cheese and some cinnamon rolls. There were also two customised cakes for Kaley Cuoco, wishing her luck for the Golden Globes 2021 award ceremony. Confetti was sprinkled all around her, and it was the perfect picture to capture the post-party blues! As they say, there’s nothing that some good food can’t cure; and Kaley Cuoco clearly believes in that.

The photograph of the actress was appreciated by many Hollywood bigwigs. “This is truly iconic. You are truly iconic,” wrote Stassi Schroeder Clark, while actress Ashley Aubra said, “And the winner for the best loser award goes to…”. Kaley Cuoco’s husband Karl Cook too commented on the click, “That was food for everyone honey!! Haha honey you’re amazing I am so proud of you and everything you do.”

Did you relate to Kaley Cuoco’s click filled with food? Tell us in the comments below.