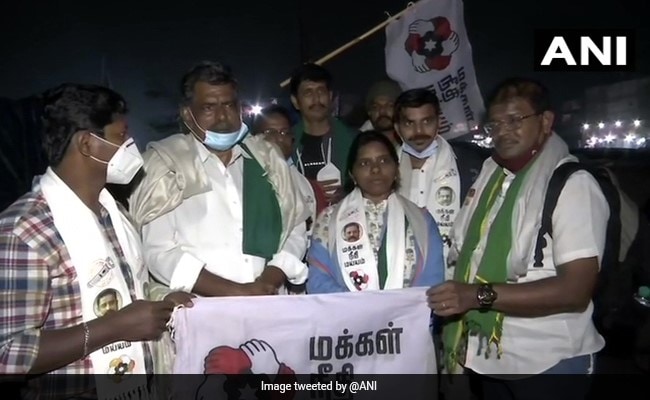 The 10-member team was led by the MNM Farmers’ Wing state secretary Mayilsamy.

“We have a team of farmer wing secretaries from all of Tamil Nadu. We are here standing in solidarity with farmers of Haryana and Punjab. We are here to show support from the party as well as farmers of Tamil Nadu. We also want the bills to be removed. The farmers are not liking it and the government has to have a dialogue. Our prime minister has to come down and have dialogue with the farmers and take back 3 farm laws,” MNM women and children welfare state secretary Mugambika Ratnam told ANI.

Mugambika Ratnam, MNM said, “We’re standing in solidarity with farmers of Haryana&Punjab. We’re here to show the support of farmers from Tamil Nadu. New farm laws should be repealed.” pic.twitter.com/DCC9AKzWpm

“Mandi system here is not similar to down south. The farmers are used to the Minimum Support Price (MSP) and Mandi system and not willing to let go of them. So we are with the farmers in full strength.”

“We have come all the way from Tamil Nadu. We are here to support the farmers and help them meet the demands. The solution is only to take back these 3 laws,” Deputy state secretary farmer wing Parthsarthy said.

Talking about the message from Kamal Hassan to the team, Parthsarthy said, “Kamal Hassan said this is not just agitation of Punjab and Haryana and it is a pan-India movement. Go there and support the farmers and show that it is our problem and the government should also listen.”

The 10-member team was led by the MNM Farmers’ Wing state secretary Mayilsamy.

Addressing a press conference on Sunday, farmer leader Baldev Singh Nihalgarh said, “This agitation is not only of Punjab but people from across the country have joined in. Ministers are running around anxious over the call for Bharat Bandh.”

Nihalgarh also furnished details of the Bharat Bandh called by farmers” outfits on December 8. Everything will be closed from morning to evening on Tuesday while “Chakka Jaam” will go on till 3 pm.

“Ambulances and wedding processions will be allowed to pass and the demonstrations will be peaceful,” Nihalgarh said adding that a major demonstration will be organised at Sector 17 ground in Chandigarh on December 7.

While thanking those who extended support to the agitation, Nihalgarh said, “Hastening the agitation has become a necessity. The government is not ready to change the three farm laws.”

During the press conference on Sunday, farmer leader Jagmohan said, “It has been decided that our demand is non-negotiable.”