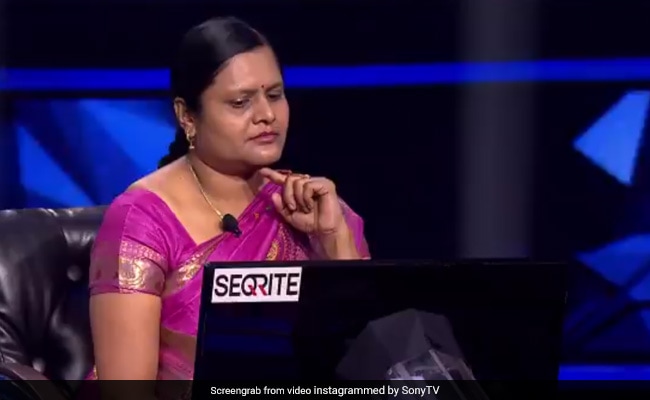 KBC 12: Anupa Das in a still from the show. (courtesy SonyTV)

The popular TV quiz show Kaun Banega Crorepati 12, found this season’s third crorepati in Anupa Das, a school teacher from Chhattisgarh. Earlier, contestants – Nazia Nasim and Mohita Sharma – answered the Rs 1 crore to become crorepati. Anupa Das, during the course of the episode revealed that she would use the winning amount for her mother’s cancer treatment. Anupa Das, who moved to Mumbai for her mother’s treatment, also opened up about the struggles she faced. Here’s the question that made Anupa Das win Rs 1 crore – ‘Who was awarded the Param Vir Chakra for his bravery on 18 November 1962 at Rezang La in Ladakh?’ She used her last lifeline 50-50 to answer the question. The answer to the question was Major Shaitan Singh.

Anupa Das decided to quit the game after winning Rs 1 crore. Meanwhile, the Rs 7 crore question also known as the “jackpot question” asked in tonight’s episode was: ‘In One Day International cricket, which team have Riaz Poonawala and Shaukat Dukanwala represented?’ The answer to the question was United Arab Emirates. When Amitabh Bachchan asked her to guess one of the options after quitting the game, she picked the right one.

Some of the questions asked in tonight’s episode of Kaun Banega Crorepati 12 were:

Bilaspur was the capital of which kingdom until it was captured by the Marathas in the 18th century ?

Which of these planets is the largest?

Skeet and trap are events in which Olympic sport?

Which of the following places in Odisha is believed to be the site where the Kalinga war was fought?

‘Lilavati’s Daughters‘, a book published by IAOS Bengaluru, features about 100 essays on which of these groups of people?