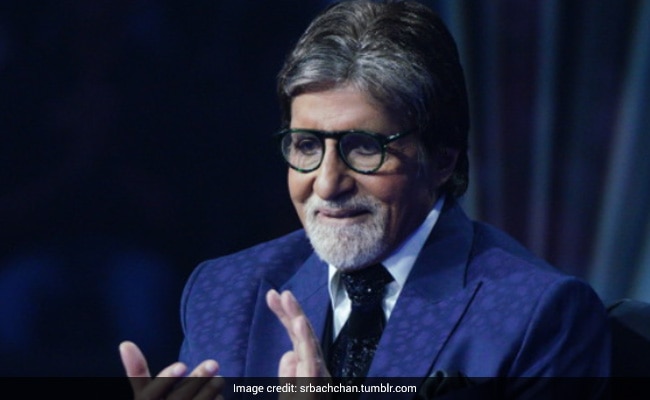 On Wednesday’s episode of Kaun Banega Crorepati 13, Amitabh Bachchan hosted three contestants. The first was roll over contestant Kinnori Joshi, who left the show with Rs 3.2 lakh. The second contestant was Ashutosh Shukla from Kanpur, who really impressed Mr Bachchan with his confidence. Ashutosh Shukla was accompanied by his wife on the show and Mr Bachchan, being the fun host he is, enquired about their equation with each other. Mr Bachchan sided with contestant Ashutosh Shukla and said wives keep calling all the time, asking for whereabouts. Big B said it’s the same story in every household.

Meanwhile, when Ashutosh Shukla’s wife complained that he doesn’t take enough leaves to spend time with him, Mr Bachchan spoke in her favour. At this point, Ashutosh Shukla told Mr Bachchan: “Your answers are diplomatic. Whose side are you on?” This sent the audience into a fit of laughter as Big B said: “The wife is always right.” Ashutosh Shukla went home with a prize money of Rs 3.2 lakh. Mr Bachchan started a new round with the next contestant Kalpana, who will continue to play on Thursday’s episode.

Here are some of the questions asked on Wednesday’s episode of Kaun Banega Crorepati 13. How many of these can you answer? Tell us in the comments below:

Yerwada and Bagheshwari are two types of which of the following?

Which of these states has the least number of seats in the Lok Sabha?

Which of these crops is usually grown from the stem instead of seed?

Which if these historical eras occurred first?

What does the ‘I’ stand for in UPI?

Which crop is also known as white gold?

What does the letter X denote in X-Ray?

Who’s memoire is titled ‘I Am No Missile’?

Which railways minister tendered his resignation on moral grounds after a train accident in Gaisal?

Which future Bharat Ratna performed at India’s first Independence Day celebrations at the Red Fort in 1947?

Watch this space for more updates on Kaun Banega Crorepati 13.