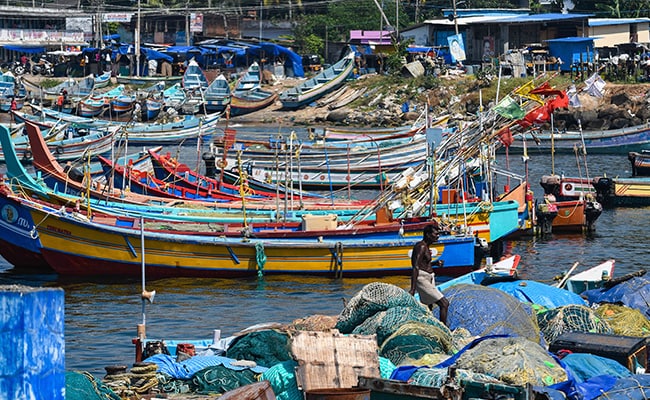 Kerala has warned fishermen against going to sea, but 161 Tamil Nadu boats are still out (File)

Kerala is on high alert as Burevi inches closer to its shores, with the cyclonic storm expected to cross Thiruvananthapuram by Friday and affect seven districts over 72 hours starting today.

The storm is expected to first pound Sri Lanka’s northern coast, bringing with it heavy rains and winds up to 90 km per hour. It is likely to weaken by the time it crosses the Gulf of Mannar and turns back to hit Kerala and parts of Tamil Nadu, but will still be powerful.

Mr Vijayan said that by Wednesday evening close to 2,500 relief camps had been identified and nearly 700 people were already relocated. He also said fishermen had told not to venture out to sea till Saturday, and that residents had been advised to not leave home unless it is an emergency.

“Eight teams of the NDRF (National Disaster Response Force) have reached the state. Air Force facilities have been arranged at Sulur base in Tamil Nadu’s Coimbatore. The Navy is also ready,” the Chief Minister said as he outlined measures being taken.

“A State executive meeting, chaired by the Chief Secretary, has met and assessed the situation,” he added, reassuring Kerala residents “there is no need to worry”.

Mr Vijayan also confirmed that travel restrictions may be imposed in Pathanamthitta district – one of seven expected to receive heavy rainfall – for people going on pilgrimage to Sabarimala.

The Chief Minister also said that water levels in the Neyyar, Kalada and Kalki dams would be reduced to prevent flooding. At present, the Neyyar, Aruvikkara, Kalada, Malankara, Shiruvani, Kanjirapuzha and Pothundi dams have been opened.

Meanwhile, parts of Tamil Nadu are also likely to receive heavy rainfall; Burevi is expected to make first contact with the Indian coast somewhere between Pamban and Kanyakumari.

Around 360 people have been evacuated from the Pamban area already, with relief camps set up in the Ramanathapuram and Kanyakumari districts and 18 NDRF teams deployed in the southern parts of the state. A team is on standby in Puducherry as well.

Worryingly though, 161 fishermen’s boats have yet to return to their villages in Kanyakumari.

Tamil Nadu is still recovering from the impact of Cyclone Nivar, which hit just days ago.

With input from ANI, PTI