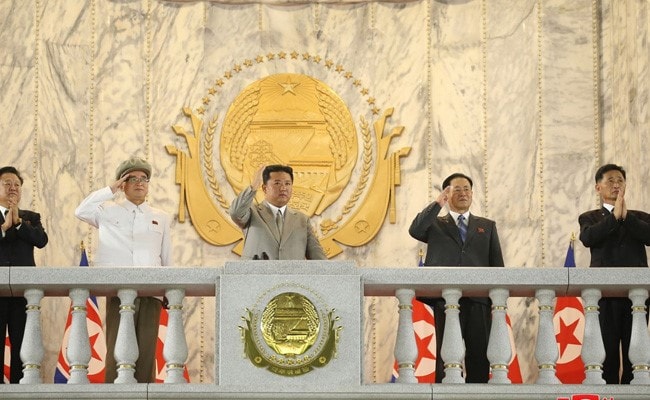 Kim Jong Un may have dropped at least 20 kilograms over past several months.

North Korean leader Kim Jong Un held center stage at a military parade, showing off to a national television audience a thinner frame, a trace of a tan and a haircut reminiscent of his grandfather — state founder Kim Il Sung.

There were no major new weapons on display at North Korea’s first military parade since U.S. President Joe Biden took office that was broadcast on Thursday, but there was a lot of attention on a new-look Kim, who has undergone a noticeable weight loss over the past several months.

Dressed in a light-colored suit, Kim didn’t speak at the parade. But he waived, smiled and gave a thumbs up as thousands of goose-stepping paramilitary and public security forces marched for more than an hour through central Kim Il Sung Square in Pyongyang, fixing their gazes to the balcony where the leader was watching as they passed.

Kim — overweight and a smoker — has been the subject of health speculation for years and his public appearances are closely tracked for insights about the autocratic and secretive regime in Pyongyang, especially since his family has a history of heart disease.

The North Korean leader may have dropped at least 20 kilograms (44 pounds) over the past several months, according to a South Korean lawmaker briefed by a spy agency official in July. He looked even thinner at the parade.

At the parade, Kim also appeared to paying homage to his grandfather with a haircut similar to one sported by Kim Il Sung about 70 years ago.

In June, state media cited a citizen as saying North Koreans broke down in tears over seeing a dramatically thinner Kim Jong Un. The 37-year-old leader returned to the public eye cutting a much thinner figure after being absent for most of May, which raised questions about his health.

Kim has been looking to rally support as North Korea is facing one of its worst food shortage in years. He is struggling to build an economy hit by sanctions to punish the country for its testing of nuclear weapons and missiles that can deliver warheads.