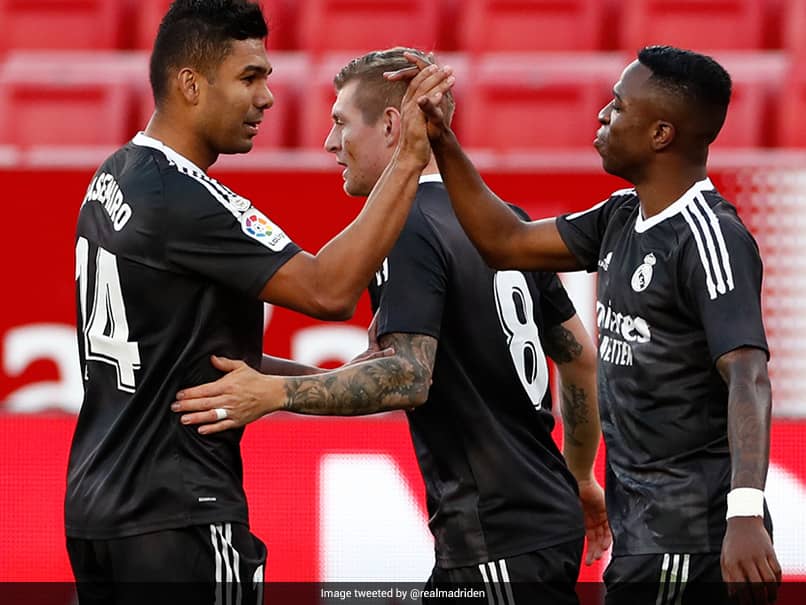 
Zinedine Zidane had some of the pressure lifted on Saturday when an own goal from Sevilla goalkeeper Bono gave Real Madrid a 1-0 win away to Sevilla. Bono guided Vinicius Junior’s effort into his own net in the second half, allowing Zidane’s side to move up to third in the table after their first league victory since October. Since Madrid crashed to a 2-0 defeat to Shakhtar Donetsk in midweek to leave their Champions League qualification hopes in the balance, press reports in Spain have linked former Tottenham boss Mauricio Pochettino and ex-Madrid forward Raul to Zidane’s job. Zidane made two changes from the debacle in Ukraine with Casemiro and Vinicius replacing Martin Odegaard and Marco Asensio.

Ex-Madrid boss Julen Lopetegui brought back Bono into the starting lineup after he missed four games with coronavirus which included Wednesday’s heavy European defeat to Chelsea.

Morocco’s Bono made a shaky start as his attempted clearance inside his own box was blocked by Vinicius.

He made up for the error on his own line despite Karim Benzema’s efforts.

The former Girona keeper kept the sides equal at the break with a tidy save from Benzema’s 38th minute shot, but his crucial mistake came 10 minutes into the second half.

Ferland Mendy played a low cross into the area before Vinicius slid in to guide it towards the goal.

Bono came out to close the space but deflected Vinicius’ limp attempt into his own goal.

The hosts’ Suso, making his first appearance since late October, and Lucas Ocampos had late chances to equalise but Zidane’s men held on for a morale-boosting win before Wednesday’s crucial Champions League group game against Borussia Moenchengladbach.