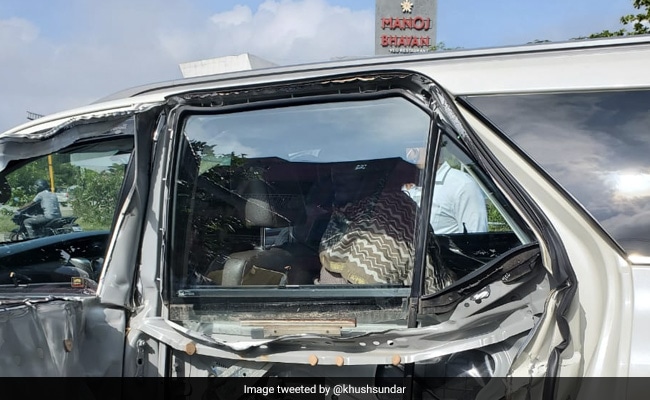 Actor-turned-politician Khushbu Sundar, who joined the BJP last month, escaped unhurt after she met with an accident in Tamil Nadu this morning . “Met with an accident near Melmarvathur… a tanker rammed into us. With your blessings and God’s grace I am safe,” she tweeted, sharing two photos of her badly damaged car.

The police said Ms Sundar’s car brushed against a container. The driver of the container has been detained.

The accident took place in the town of Melmarvathur in Kancheepuram, about 97 km from state capital Chennai, when she was on her way to Cuddalore district to participate in a “Vetri Vel Yatra” (Victorious Spear March) which has become a flashpoint between the BJP and state’s ruling AIADMK, its ally.

Met with an accident near Melmarvathur..a tanker rammed into us.With your blessings and God’s grace I am safe. Will continue my journey towards Cuddalore to participate in #VelYaatrai#Police are investigating the case. #LordMurugan has saved us. My husband’s trust in him is seen pic.twitter.com/XvzWZVB8XR

In another tweet, Ms Sundar, 50, reiterated that it was the container that hit her car and not the other way, adding that the police are questioning the driver of the container to “rule out any foul play”.

Request the press to understand that a container rammed into me and not the other way. My car was on the move in the right lane and this container came from nowhere and rammed into me. Police are investigating n questioning the driver to rule out any foul play.

Ms Sundar said she will proceed to Cuddalore to participate in the event.

“Vetri Vel Yatra”, planned from November 6 to December 6, was conceptualised in honour of Lord Muruga known for his “Vel” or spear.

When the AIADMK government banned the yatra over Covid worries, the BJP asserted its right to hold the event. The BJP said its rally – an annual exercise – was against what it called the anti-Hindu agenda of some parties.

Khushbu Sundar, 50, changed camp from the Congress and joined the BJP just months before the Tamil Nadu polls. In her resignation letter to Congress president Sonia Gandhi, she wrote that she felt “pushed and suppressed” by people who had no connect with ground reality.

Soon after joining the BJP, she has become a prominent face of the party in Tamil Nadu. Last month, she was briefly detained by the police on her way to lead a protest against a politician for his remarks on ancient Hindu text Manusmriti.

Tamil Nadu would go for polls in May next year and the BJP, which has negligible presence in the state, has brought in many news faces ahead of the election. The ruling AIADMK-BJP alliance suffered a near rout in the Lok Sabha polls.