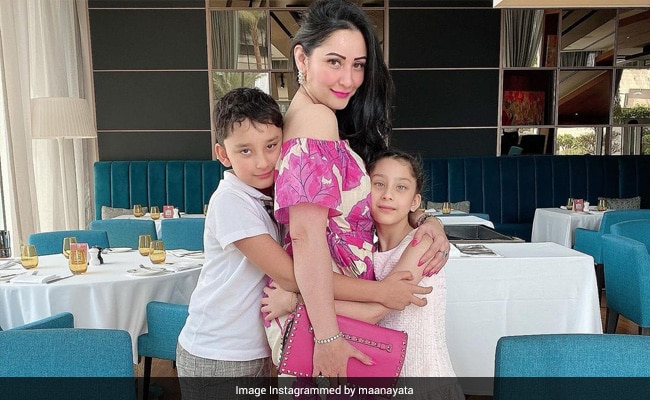 Sanjay Dutt’s wife Maanayata Dutt often trends for her heart-touching social media posts and on Children’s Day, she added one more to the collection. Sanjay Dutt and Maanayata are parents to twins – son Shahraan and daughter Iqra. On Children’s Day, Maanayata shared some important life lessons with her kids with a beautiful message about ignorance and strength. Advising them to grow stronger together, Maanayata wrote: “Today’s a new day… it’s your day… You shape it! Don’t let it be shaped by someone else’s ignorance or fear… grow stronger… wiser and humble.” Maanayata accompanied her post with an adorable photo of herself posing with the pint-sized Dutts.

The Dutts recently overcame difficult times, often during which, Maanayata wrote about embracing positivity and strength. Sanjay Dutt underwent medical treatment for health concerns for weeks. He took a break from work and after emerging on the victorious side of things, he wrote: “I am happy to come out victorious from this battle.” Sanjay Dutt shared the message on his kids’ birthday.

On Diwali, the actor shared a perfect family photo from Dubai and wrote: “Nothing is better than celebrating with family.”

On Dussehra, Maanayata dedicated a lengthy message to Sanjay Dutt, writing: “There is truly no one like you Sanju, you taught me when the going gets tough, only the tough gets going.”

During Sanjay Dutt’s medical treatment in Mumbai, he had to stay away from his kids and Maanayata who were in Dubai, because of the lockdown. They reunited in September, when Sanjay wrote in an emotional post: “I want to thank God for the gift of family.” His upcoming movies include Torbaaz, Bhuj: The Pride Of India, Prithviraj, Shamshera and KGF: Chapter 2.