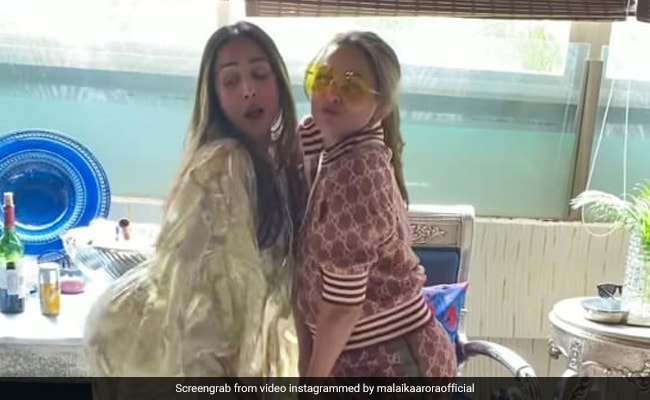 Malaika and Amrita and in a still from the video. (courtesy:malaikaaroraofficial)

Is there anything Malaika Arora cannot do? We think not. Be it glamorous photoshoots or cooking videos, the actress can do it all and in style. Malaika Arora, who is known for her dancing skills, showed us that talent runs in her family as she danced with her sister, Amrita Arora in a recent video. In the clip that Malaika Arora shared on Instagram, she and Amrita groove to the song Touch It by KiDi that is trending on the photo-sharing platform. The two are seen pulling off some sassy moves with Amrita Arora nudging her sister out of the frame playfully at the end of the clip.

Along with the video, Malaika Arora wrote in the caption, “Succumbed…Hips don’t lie.” Fans seemed to love the clip as they reacted to the post with fire emojis. Moreover, Amrita Arora’s move of kicking Malaika Arora out of the frame also elicited a bunch of laughing emoticons in the comments section.

Amrita Arora often makes an appearance in many of Malaika Arora’s posts. Some time ago, the supermodel shared a bunch of throwback photos of herself along with Amrita, their mother Joyce Arora, and other members of the family. In the caption, she wrote, “Mamas,” with a heart emoji.

On Joyce Arora’s birthday, Malaika Arora had shared a few pictures in which the two sisters and their mother look lovely in traditional wear. Along with the snaps, she wrote, “It’s mothership’s birthday and we can’t stay calm… Love you, Momsy.”

And when Malaika Arora is not making us smile with posts about her family, she is setting some serious glamour goals. Recently, Malaika Arora shared a candid photo of herself making a funny face for the camera. The monochrome image of Malaika Arora also led to her boyfriend Arjun Kapoor dropping a heart-eyes emoji below the post.

Malaika Arora has featured in several popular songs such as Chaiyya Chaiyya and Munni Badnaam Hui, among others. She is appearing as a judge on the reality show, Supermodel Of The Year 2.