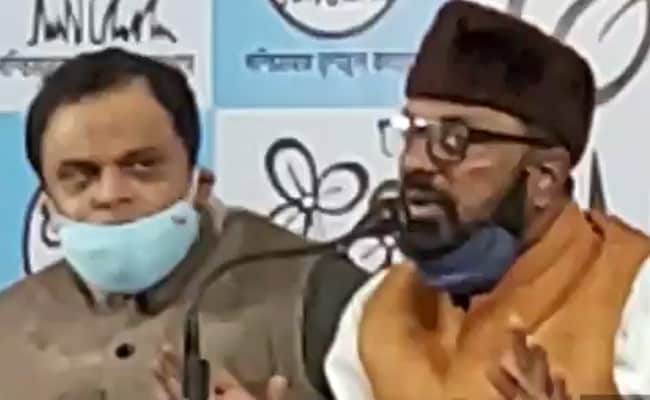 Mamata Banerjee is “the most secular leader” in the country, a number of ex-AIMIM leaders said Monday as they joined the Trinamool Congress in Bengal and promised that neither the BJP nor AIMIM chief Asaduddin Owaisi would make any political gains ahead of next year’s Assembly polls.

“Mamata Banerjee is the most secular leader in India. She has championed the Muslim cause (and) has been criticised for it. She is the only leader in the country who was on the road to opposed NRC (national register of citizens),” Anwar Hasan Pasha, who led the 20-strong AIMIM team that switched sides at the Trinamool’s headquarters in Kolkata, said.

Referring to the Bihar election, he also warned Mr Owaisi against contesting in Bengal.

“If Mr Owaisi comes to Bengal, we will stand up against him. What we saw in Bihar will not be allowed in Bengal. The politics of divide and rule, and polarisation. Mr Asaduddin Owaisi polarised the voters in Bihar. My advice to Mr Owaisi is… don’t come to Bengal,” Mr Pasha said.

Trinamool minister Bratya Bose, who handed Mr Pasha the party flag, described him as “the key AIMIM leader in Bengal” and said he and the others had been “inspired by Mamata Banerjee”.

“Inspired by the work of Mamata Banerjee, members of AIMIM, which has a communal agenda, decided they had enough of such politics and joined the Trinamool today,” Mr Bose said, claiming that the entire party in Bengal would soon follow suit.

That rather grand assertion, as well as Mr Pasha’s status within his former party, were swiftly dismissed by Syed Asim Waqar, the AIMIM’s Bengal observer.

“Mr Pasha was just another member, who had been inactive for over a year. His exit is no loss,” he said, and alleged that the Trinamool had been planting moles within his party for over a year.

“Now they (the moles) are exposed,” he declared.

Earlier the BJP’s Saumitra Khan said the AIMIM, which is often called the BJP’s “vote katua (vote cutter) party” – because it divides the minority vote – had no tangible presence in Bengal.

“There was no AIMIM in Bengal anyway. People with Trinamool were with AIMIM and now AIMIM members are back in the main party,” he said.

The Congress’s Pradip Bhattacharya isn’t convinced and has alleged that the party’s intention is to “break the opposition parties so that the BJP benefits and wins in this election”. “If Mamata Banerjee is fighting against the BJP, why is she accepting these people?” he demanded.

Mr Pasha, 49, told NDTV earlier that he had started working with the AIMIM in 2013 and that its sphere of influence extended across the Malda, Murshidabad and North and South Dinajpur districts of Bengal, which adjoin Bihar’s Seemanchal.

All five seats that the party claimed in the Bihar election were from the Seemanchal district.

Support is also growing in the Hooghly and North and South 24 Parganas districts, he claimed.

When Mr Owaisi announced he would field candidates in Bengal, analysts said the move could divide the minority vote and hurt the Trinamool, which draws the Muslim vote almost en bloc.

A splintered minority vote would mean fewer votes for the Trinamool. Therefore, dismantling the AIMIM in Bengal and getting its members to join the Trinamool is a masterstroke, analysts said.

However, the party’s Bengal observer has played down such thoughts, claiming there were “lakhs and lakhs of workers”.

“Pasha promised the Trinamool 5,000 workers. Where were they?” Zamirual Hasan, an AIMIM Bengal member and a rival of Mr Pasha, asked.

Asaduddin Owaisi, who is presently occupied with the prestigious Hyderabad municipal polls (scheduled for next week) is likely to visit Bengal some time next month, Mr Waqar said.