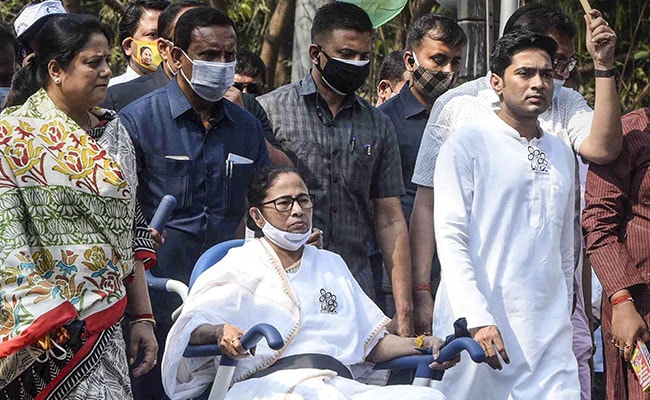 West Bengal Assembly Election: Mamata Banerjee is pitted against the full might of the BJP poll machine.

Mamata Banerjee, streetfighter extraordinaire, faces the toughest fight of her five-decade political career as Bengal votes for a new government.

The “Didi” of Bengal is no longer looking invincible as she once did, pitted as she is this time against the full might of the BJP’s election machine.

In 2016, Mamata Banerjee’s Trinamool Congress swept the election, winning 211 of the state’s 294 seats and wiping out the opposition. She was re-elected with an even greater majority than in 2011, when she ended the Left’s decades-long dominance over Bengal using the catchphrase of “Pariborton (change)”.

Despite the Narada Scam in which almost a dozen senior members of the party were seen taking “bribes” in hard cash, she pulled off a landslide in 2016 as well.

This time, “Pariborton” has been flung back at Mamata Banerjee and it is the BJP saying it, with a prefix for good measure – “Ashol Pariborton (real change)”.

Over the past year, especially in the last few months, the 66-year-old has lost many close aides to the BJP.

Her biggest loss is Suvendu Adhikari, now her worst enemy; the two are rival candidates in Nandigram, where a 15 years ago, they fought and campaigned together, winning Bengal.

Challenged by the BJP, Didi raised the bets by giving up her safe seat Bhowanipore in Kolkata and announcing her contest from Nandigram.

Whether it was brave or foolhardy will be known on May 2.

In sheer messaging, Mamata Banerjee’s point is made. She is not one to back down from a fight.

The car incident Nandigram, which left the Chief Minister with injuries and her leg in a cast, reminded many of August 1990, when Mamata Banerjee was attacked by Left goons.

Many in the BJP, and even the Congress, have questioned Mamata Banerjee’s claims of an attack. In the whole debate, the sight of the Chief Minister leading a “padyatra” in a wheelchair makes a compelling point.

“Khela Hobe (game on)” – as she says in her speeches these days.

Didi and her antics have always been standout, riveting, and hard to ignore.

She made sure of it when she was part of the BJP-led NDA government and the Congress-led UPA government at the centre. Both governments had a taste of her temper tantrums, threats to walk out and mercurial outbursts.

A history graduate with a degree in education, she studied law before joining politics.

From the unknown worker pasting anti-CPM posters to General Secretary of the Congress’ youth wing, she rose from the ranks in the Congress. She first contested elections in 1984.

In 1997, she quit the Congress and floated her Trinamool Congress. It took her 14 years to get where she wanted – the Chief Minister’s office in Kolkata’s Writers’ Building. Over the years, she has been known to be one of India’s most capricious politicians.

She likes to paint and write poetry. Her doodling is compulsive – she’s at it even through meetings – and the party’s symbol is an example of her art.

She is the published author of ‘Poribortan‘ (Change), ‘Kobita‘ (Poems) and ‘My Unforgettable Memories’.

She lives a simple life; she has forever been seen in cotton saris and rubber slippers.