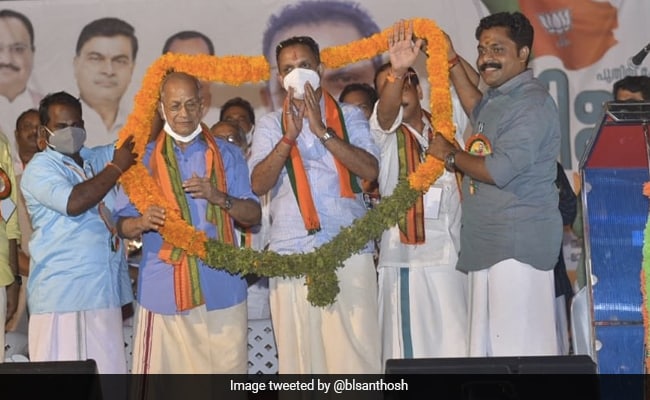 E Sreedharan said it is one of the greatest moments in his life.

E Sreedharan, a retired engineer famous for spearheading the Delhi Metro project, has joined the BJP. The 88-year-old was welcomed in the party by Kerala BJP chief K Surendran at a meeting organised at Malappuram on Thursday.

Mr Sreedharan, who was felicitated with a garland in the presence of a large number of BJP workers, said joining the party was one of the greatest moments of his life.

The engineer retired as chief of the Delhi Metro in 2011. He was also involved in other metro projects in the country such as in Jaipur, Lucknow and Kochi.

He earlier this month said he was joining the party to make a difference in Kerala using his experience as an administrator.

“I have been living in Kerala for the last 10 years, since my retirement. I have seen different governments and they are not doing what can be done for the people. I am joining the BJP to be able to do my part, using my experience,” he had said.

He had also said that he was ready to contest the Kerala Assembly election, due in the coming months. When asked about chief ministership, he had said, “If they (BJP) want, certainly. To tell you very frankly, unless I am the Chief Minister these (priorities) cannot be achieved.”

The BJP has just one MLA in the 140-strong Kerala Assembly.

The Congress has downplayed his entry in the BJP.

“The high point of the impact (of E Sreedharan) will turn out to be this announcement itself,” Congress MP Shashi Thaoor said last week.