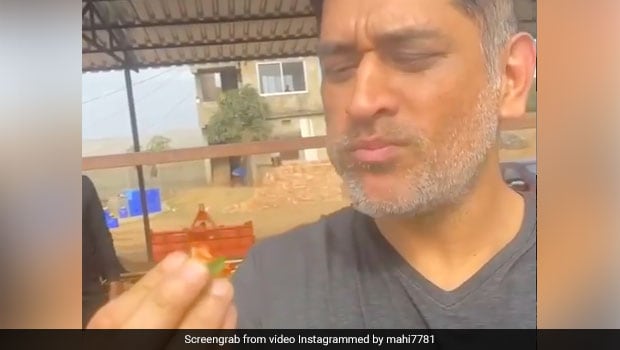 MS Dhoni’s latest video is too refreshing to miss.

Former Indian Cricket team captain MS Dhoni has begun an all-new venture at his Ranchi farmhouse. He is growing organic vegetables such as tomatoes, cabbage, peas, and more on his 10-acre land. These fresh vegetables are said to cater to the local demand in Jharkhand’s capital city. Recent reports suggest that the ace skipper will be taking his business to the global platform by exporting the vegetables to countries such as the UAE. Dhoni recently offered a glimpse of his farm on his Instagram handle. Take a look:

(Also Read: Dhoni Set To Export Vegetables From His Ranchi Farmhouse To Dubai)

“If I keep going to the farm there won’t be any strawberry left for the market,” he wrote in the caption. In the video that MS Dhoni shared, we could see him breaking a ripe strawberry from a growing bunch at his farm. The delicious fruit looked fleshy and sweet, simply irresistible to those who love organic, fresh produce. Dhoni then turned the camera towards himself, proceeding to happily devour the fruit right there and then. The video was a hit with Dhoni’s 30-million strong Instagram following, as it crossed 2 million views within just an hour of it being posted.

MS Dhoni had announced his retirement from all forms of international cricket in August 2020. The most-loved wicketkeeper-batsman has had an illustrious career spanning 16 years, during which he has led the Indian cricket team to bag several iconic wins. Apart from his farming ventures, Dhoni has been spending quality time with wife Sakshi Dhoni and their five-year-old daughter Ziva Dhoni.