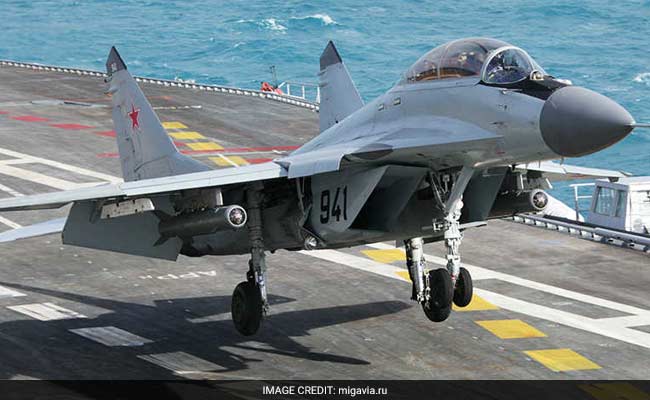 The missing pilot of the Indian Navy MiG-29K that went down in the Arabian Sea on Thursday evening managed to eject moments before it crashed. Four days after the incident, Navy specialists have located the primary wreckage of the Russian-built twin-seat fighter.

Sources told NDTV the ejection seat of Commander Nishant Singh, the instructor at the controls of the jet, is not present at this site. He remains missing. The second pilot, a trainee, has been rescued.

The MiG-29K is fitted with the Russian-built K-36D-3.5 ejection seat, widely considered the most sophisticated in the world. In the event of the ejection handles being pulled, the pilot in the rear seat is ejected first, followed by the pilot in the front.

Sources indicate the fighter was at a very low altitude when the pilots ejected. They add the trainee maintains he spotted a second parachute after he got out of the aircraft.

It is unclear why the personal locator beacon of the MiG-29K pilot failed to ping an electronic distress signal after making contact with the water.

The government continues to conduct an intensive aerial, coastal and surface search operation involving naval ships and aircraft. Divers are carrying out underwater searches using specialised equipment to map the seabed in the area around the primary wreckage site, the sources added.

Commander Singh, who recently got married, conveyed news of his wedding to his Commanding Officer in May in a humourous letter.

“I regret to be dropping this bomb on you at such a short notice, but as you would agree, I intend to drop a nuclear one on myself and I realise that just like all the split-second decisions we take up in the air in the heat of combat, I cannot afford myself the luxury of time to re-evaluate my decision,” the Commander wrote.

“…(my fiance and I) have come to a mutual agreement we might actually be able to get through the rest of our lives together, without killing each other… I officially seek your approval,” he wrote.

He indicated his marriage would take place via a Zoom video call because of restrictions in place during the Covid pandemic.

On Sunday the Navy said several parts of the aircraft, which crashed after taking off from aircraft carrier INS Vikramaditya, had also been recovered.

A high-level inquiry has been ordered to investigate what is the third mishap involving a MiG-29K aircraft in the last 12 months.

In February a MiG 29K crashed after being hit by birds over Goa. The pilots managed to steer the jet away from inhabited areas before ejecting, an action which drew praise from Minister of State for Defence Shripad Naik.

In November last year, a MiG-29K trainer crashed outside a village in Goa. Both pilots ejected safely.

The MiG-29K is an all-weather carrier-based multirole fighter aircraft developed by Russian aerospace company Mikoyan (MiG). The Navy procured a fleet of 45 MiG-29Ks at a cost of around two billion dollars to operate from INS Vikramaditya.