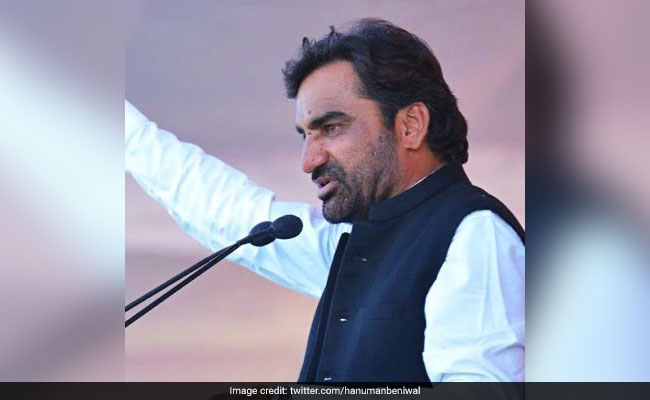 Rajasthan MP Hanuman Beniwal, and chief of Rashtriya Loktantrik Party (RLP) – a part of the ruling National Democratic Alliance (NDA) – has urged the BJP-led central government to immediately repeal the three agricultural laws that have led to the ongoing “Delhi Chalo” protest by farmers.

Mr Beniwal also pressed for the government to immediately talk to farmers instead of December 3 – the scheduled date for a second round of ministerial talks to address farmers’ concerns.

“Mr Amit Shah, in view of the countrywide sentiment in support of the ongoing farmers’ movement, the recently introduced three bills related to agriculture should be immediately withdrawn. (The centre must) implement all recommendations of the Swaminathan Commission, and immediately hold dialogue with farmers Delhi,” tweeted the RLP chief, whose key voter base constitutes farmers.

“RLP is an NDA constituent, but its power comes from farmers and jawans. If prompt action is not taken in this matter, I will have to rethink being a partner in the NDA in the interest of farmers,” he added.

The threat came days after Mr Beniwal, whose party contested the last Rajasthan election in alliance with the BJP, said governments of neighbouring states, including Haryana, should not adopt any oppressive policy against farmers.

“If the police and governments adopted oppressive policy against farmers, the RLP will hold demonstrations across the country, including Rajasthan, in favour of farmers,” he had said on Thursday.

He had hinted he would join the Delhi protest with lakhs of farmers from Rajasthan.

Hanuman Beniwal was earlier with the BJP but quit over differences with former chief minister Vasundhara Raje and formed his own party. The RLD is known for its voter base of Jats – a farmer community in Rajasthan.

The BJP-led central government is facing increasing pressure from partners, former allies and opposition parties to address demands of farmers who, in continuation of their months-long protest, have been camping along Delhi’s borders for five days, effectively cutting off the city from all sides.

Home Minister Amit Shah met Agriculture Minister Narendra Singh Tomar on Monday second time within 24 hours after farmers protesting against the laws rejected the Centre’s proposal of early talks over the condition to shift their protest to the venue in north Delhi.

Farmers said the government should have approached them with “an open heart” and the Centre shouldn’t have put preconditions.

The government’s offer was also rejected over fears that the suggested protest site could become a jail. “Delhi Police told the Uttarakhand Farmers Association chief that they’ll take them to Jantar Mantar but instead locked them at Burari Park,” said Surjeet Phul, Bharatiya Kisan Union president.

For nearly three months, the farmers have been up in arms against the laws aimed at bringing reforms by doing away with middlemen and improving farmers’ earnings by allowing them to sell produce anywhere in the country.

Farmers and opposition parties allege that the laws will deprive the farmers of guaranteed minimum price for their produce and leave them at the mercy of corporates. They want these laws repealed.

The BJP-led central government maintains the opposition parties are misleading farmers, who have repeatedly said their movement is completely independent.

One of BJP’s oldest allies, the Shiromani Akali Dal, had walked out of the NDA in September over the passage of farm bills in the parliament.