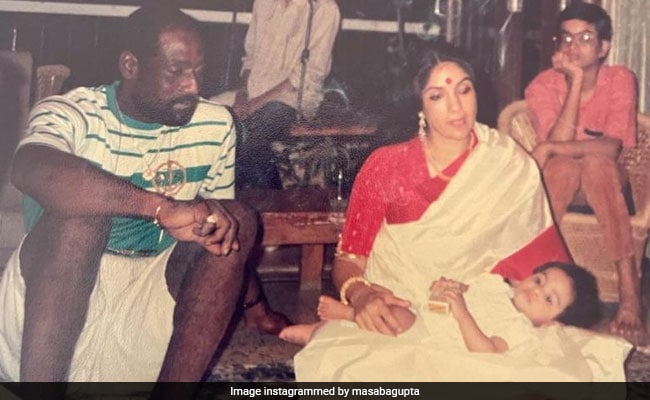 Masaba Gupta posted a throwback gem on her Instagram profile recently and it is extra special because it features her parents – veteran actress Neena Gupta and West Indies cricket legend Vivian Richards. Masaba did not reveal when or where the picture was taken but it happens to be from her childhood days. Little Masaba can be seen curled up in her mother Neena’s Gupta’s arms. “My world. My blood,” Masaba captioned her post. The post received a lot of her love from Masaba’s Instafam. Neena Gupta and Vivian Richards were in a relationship in the Eighties. Vivian Richards later married Miriam while Neena Gupta got married to chartered accountant Vivek Mehra.

Check out the throwback picture here:

Masaba Gupta was last seen in the Netflix smash hit Masaba Masaba, a semi-fictionalised show inspired by the lives of Masaba Gupta and her actress-mother Neena Gupta. It was directed by Sonam Nair and produced by Ashvini Yardi. The second season of the show will release this year. Last year, Masaba also featured as one of the judges on the TV reality show MTV Supermodel Of The Year. Priyanka Chopra, Alia Bhatt, Sonam Kapoor, film producer Rhea Kapoor and many other Bollywood stars, including Masaba’s mother Neena Gupta, swear by her designs.