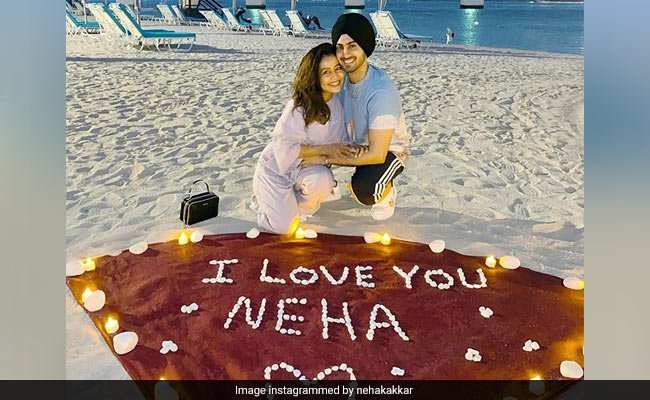 Neha Kakkar and Rohanpreet Singh, on Tuesday, filled their respective Instagram diaries with pictures from their Dubai honeymoon and we are in love with them. The duo, who got married in October, surely made some sweet memories in Dubai, glimpses of which we can see in pictures from their honeymoon diaries. In some of the pictures, Neha Kakkar and Rohanpreet can be seen posing in front of the hotel Atlantis they are staying in. Rohanpreet also wrote a special message for Neha on the beach, a picture of which the singer also added to her honeymoon album. Other pictures feature the couple smiling with all their heart and enjoying the beauty of Dubai. “Honeymoon diaries,” Neha Kakkar captioned one set of pictures.

Neha Kakkar and Rohanpreet Singh took off to Dubai earlier this month for their honeymoon. On Diwali, the singer posted a couple of pictures of themselves celebrating the festival with zest and zeal in Dubai. “Our first diwali together and most special one. Happy Diwali everyone! God bless you all,” she wrote in the caption.

And here’s what Rohanpreet Singh shared from their honeymoon diaries:

Neha Kakkar and Rohanpreet Singh got married in a traditional Sikh ceremony on October 24. It was followed by a grand ceremony and a lavish reception.

Neha Kakkar has sung tracks like Dilbar redux, Manali Trance, Kala Chashma, Aankh Mare redux from Simmba, among many others. Rohanpreet Singh is known for participating in wedding reality show Mujhse Shaadi Karoge. He also appeared in the musical reality show India’s Rising Star and was the first runner up in the second season.