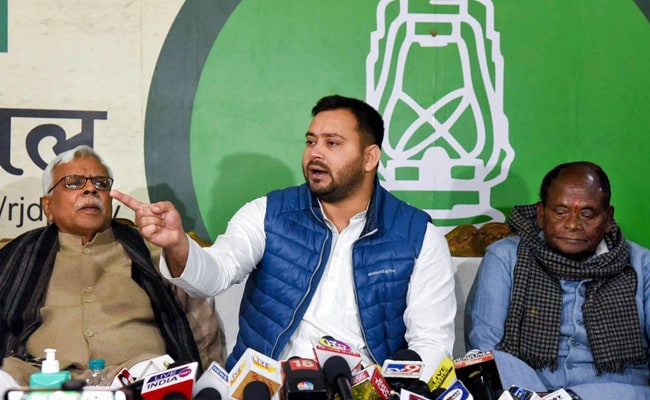 Tejashwi Yadav alleged that the state government has destroyed Bihar in every aspect.(FILE)

Slamming the Bihar government over the issue of liquor smuggling by a family member of a minister in the state cabinet, Rashtriya Janata Dal (RJD) leader Tejashwi Yadav on Saturday claimed that no chief minister in the country is as “weak” as Nitish Kumar.

“The allegations of smuggling of liquor against a minister is a serious matter. The government must discuss this in the house. When there are serious allegations against his minister, Nitish Kumar has been absent. The government is scared and nervous. They are not allowing the Opposition to speak. They fear that we will show the evidence. There is no such weak chief minister in the country as Nitish Kumar,” Mr Yadav told mediapersons in Patna.

Hitting out at Bihar Deputy Chief Minister Tarkishore Prasad, Mr Yadav said, “The deputy chief minister is not a constitutional post. When the speaker is allowing me to speak then why is he interrupting. Who does give him the right to dictate the speaker? This government has made those people ministers who do not aware of the constitution.”

The RJD leader alleged that the state government has destroyed Bihar in every aspect.

“There is high inflation. Unemployment is at its peak. From farmers to students, all are unhappy. Women are not safe. The government is not allowing us to put our views in the House. It is a dictatorship. Vidhan Sabha has become the office of Janata Dal (United) and Bharatiya Janata Party,” said Mr Yadav.

Earlier in the day, Tejashwi, Tej Pratap Yadav and other RJD MLAs held a protest march towards the Raj Bhawan after walking out of the Bihar assembly. They met the Governor and raised the issue before him.

Notably, there was a ruckus in the Bihar assembly regarding the allegations of smuggling of illicit liquor against state minister Ramsurat Rai. The controversy surfaced after illicit liquor was recovered earlier this week from a school in Muzaffarpur run by Mr Rai’s brother.

In 2016, Nitish Kumar banned alcohol consumption in Bihar making it a dry state.