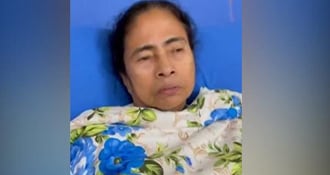 The West Bengal government’s report to the Election Commission on Friday on the incident at Nandigram in which Chief Minister Mamata Banerjee was injured, has no mention of the “four-five persons”, who allegedly attacked her, an official of the state CEO’s office said.

It, however, referred to the presence of a huge crowd at the spot where the incident took place, he said.

The report also mentioned that there was no clear footage available of the spot where the incident took place from anywhere in the vicinity, he said.

Ms Banerjee was injured at Birulia bazar in Nandigram in East Midnapore district on March 10 while campaigning.

“The only CCTV in the area which was in a shop was not working. Even the versions of the locals, considered to be eyewitnesses of the incident, were mixed. So reaching a conclusion is not possible,” a senior official of the district administration told PTI.

The Election Commission had sought a report from the state chief secretary and the two observers appointed for the coming Assembly poll, following the incident.