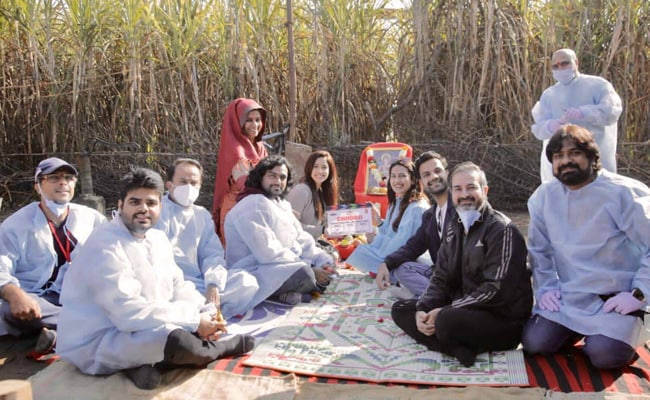 After their announcement in May this year, Abundantia Entertainment and Crypt TV’s maiden joint venture Chhorii has just gone on floors. Joining hands with them is T-series, India’s leading movie studio and largest music label that has recently come on-board for the film. Headlined by Nushrratt Bharuccha, Chhorii commenced filming today in the central Indian state of Madhya Pradesh (MP). This is a start-to-finish filming schedule and the unit will film all through December across Madhya Pradesh, with a few days to be shot subsequently in Mumbai in the film’s final schedule.

The film is being shot at live locations in the interiors of MP. These locations include dense sugarcane fields and rustic villages that add to the overall scare quotient of the film. In addition, an elaborate set has been constructed to recreate typical village dwellings. The filming kicked-off after the traditional Indian mauhurat puja which was attended by the entire unit.

Much like their Vidya Balan’s Sherni, Abundantia Entertainment on this production too has put in place elaborate health and safety measures to manage and mitigate the risk of COVID-19 on location and within the crew. These include compulsory usage of PPE suits, face masks, frequent sanitisation and temperature checks as well as blood oxygen level checks.

In addition, isolation and quarantine measures have also been put in place on stand by. A specialist agency has been hired to manage all of the above and a detailed briefing session was conducted a day ahead of the start of filming to familiarise the crew with all these measures.

(Except for the headline, this story has not been edited by NDTV staff and is published from a press release)