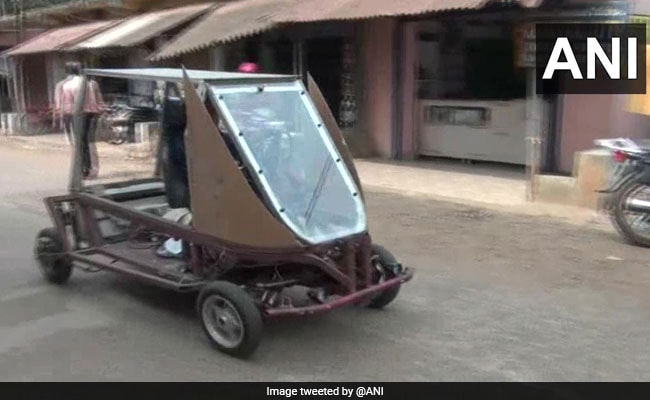 The car’s battery can be fully charged within eight and a half hours, Sushil Agarwal said

A farmer in Odisha’s Mayurbhanj has built an electric four-wheeler that runs on a solar-powered battery. The car built by Sushil Agarwal is powered by 850 Watts motor, 100 Ah/ 54 Volts of battery and can run 300 km on a single charge.

“I have a workshop at home. During COVID-19 lockdown, I began working there to create this. It can run for 300 km after full charge,” Sushil Agarwal told news agency ANI.

The car’s battery can be fully charged within eight and a half hours, he said.

“It is a slow charging battery. Such batteries have a long life. It can last upto 10 years,” he said.

“All the work on this vehicle, including motor winding, electrical fitting and chassis work, were done in my workshop with the help of two other mechanics and a friend who advised me on electric works,” he added.

It has been 3 months since he completed the work on the vehicle which is still in its initial frame.

The idea to build his own car hit him during the boring lockdown days and he began assembling the parts one by one to put the vehicle together.

He has built the vehicle just by reading some books and watching videos on YouTube.

“I am glad to know that he has tried to design and manufacture a solar battery powered vehicle during the lockdown period. Such environmentally-friendly vehicles that do not cause much pollution are the future of the automotive industry,” Gopal Krishna Das, an official of the Regional Transport Office (RTO) in Mayurbhanj said.

“Society should encourage this type of invention. It is advisable to improve the design in consultation with Government of India’s agencies like ARAI, CIRT to improve the safety, comfort and efficiency of the vehicle so that can it be used on roads,” Mr Das said.