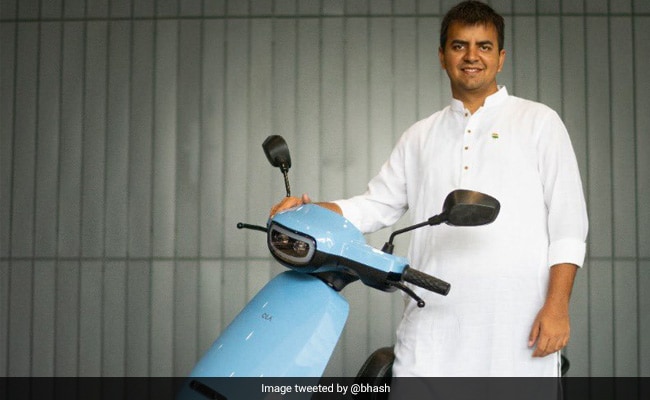 As people across the world are warming up to the idea of electric vehicles (EVs), there are several practical issues that users are faced with. One of the most common issues in India is the lack of adequate infrastructure to charge the vehicles. Unlike fuel-run vehicles that have petrol and diesel bunks at their disposal, the charging infrastructure of EVs is at a far more nascent stage. In this context, Bhavish Aggarwal, CEO of Ola, has offered what he considers to be the “easiest solution” to the issue.

This type of charging infrastructure, Mr Aggarwal said, would be “much cheaper than lots of large scale public fast charging.”

Mr Aggarwal’s take on the issue came on the heels of a tweet by Paytm founder Vijay Shekhar Sharma. In his post, Mr Sharma requested the government to amend the policy encouraging EV charging points in office spaces as well as residential areas.

Mr Sharma said that switching to EVs is not a luxury but the need of the hour, in the context of environmental concerns such as air pollution. “Ouch. I wish we all embrace that EV is not a luxury, it is an obligation for us to have a liveable planet. Breathable city air.  While the government is at it, here is a request for PMO India and NITI Aayog to amend policy encouraging EV charging points in residential and office works spaces,” his tweet read.

Ouch! I wish we all embrace that EV is not a luxury, it is an obligation for us to have a livable planet. Breathable city air.
While Govt is at it, here is a request for @PMOIndia & @NITIAayog to amend policy encouraging EV charging points in residential & office works spaces. https://t.co/Bt37Ne8M4F

The call for action from Mr Sharma and Mr Aggarwal came in light of an account by an EV user from Bengaluru. In a LinkedIn post, Vish Ganti said that the Residents’ Welfare Association had prevented him from installing a charging point.

He wrote in his post, “You might have heard about desi “jugaad” but here is something I had to pull off today,” sharing a photo of his vehicle being charged in his kitchen.

Mr Ganti further said, “My apartment community in the so-called EV capital of India (Bangalore) wouldn’t let me install an EV charging point, after trying to educate them and fighting an uphill battle for 4 months. So I decided to load up my scooter in the elevator and bring it up to my unit on the 5th floor to charge it in the kitchen, as a sign of protest and to create awareness of this ground reality.”

“So much for the progress and all the rhetoric about EV charging in India,” Mr Ganti wrote, warning users against trying to charge their vehicles in this manner given that there are “real risks from shock and fire”.