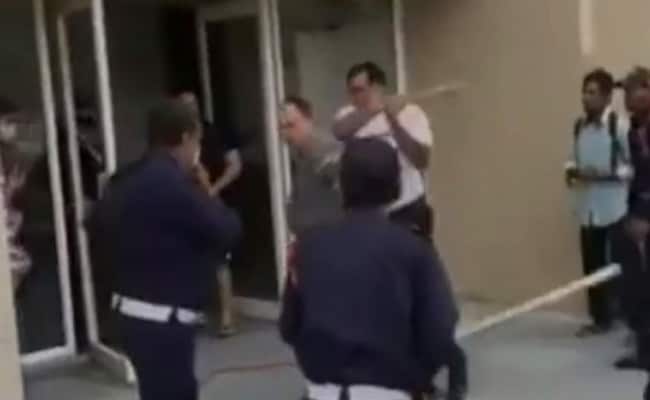 Even after the man starts bleeding from his head, guards continue to hit him.

A man living in a Noida residential society suffered head injuries after security guards ganged up and assaulted him over his complaints regarding security arrangements and maintenance of the premises.

The incident, which took place at Lotus Boulevard in Sector 39 police station area, was caught on camera by residents of the premises. One of the visuals that has gone viral shows uniformed guards hitting a middle-aged man with sticks. The place looks like the lobby of a building.

Some people are seen intervening and ask the guards to leave the lobby. The guards are then seen walking out. At this point, the man who was assaulted grabs a cane and hits one of the guards. The guards immediately charge back at him. One of them grabs him and the others hit him with sticks. The clip then shows a man, probably a fellow resident, rush to the man being attacked and shout that he is bleeding from the head. The assault still does not stop and two guards continue to rain sticks on the two men.

Police have said strict action would be taken against the guards. An officer of Sector 39 police station said a police team had been rushed to the spot on receiving information about the incident. Police had spoken to the residents and also seen the video. “It can be clearly seen in the video that the guards have assaulted the resident. Action will be taken against everyone directly or indirectly involved in this attack,” he said.