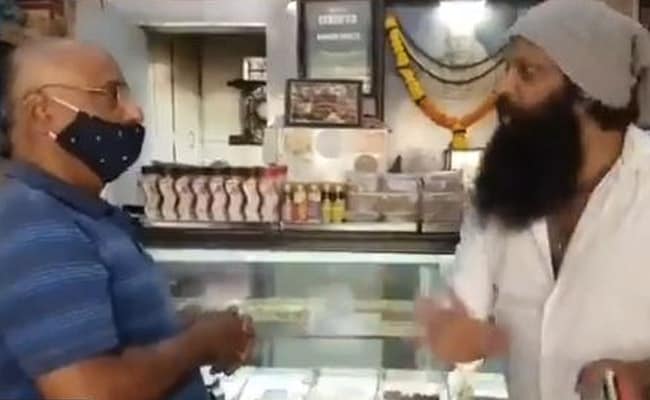 The clip has been widely shared on social media.

A Shiv Sena leader’s video, where he is seen asking the owner of a sweet shop in Mumbai – Karachi Sweets – to change the name of the store, has been widely shared on social media, triggering sharp reactions.

In a nearly two minute-long clip, Sena leader Nitin Nandgaokar, who identifies himself as a social worker on Twitter, is seen at the shop in Mumbai’s Bandra West. “Your ancestors are from Pakistan. You came from the country during the partition, and you are welcome,” he tells the owner, an elderly man wearing a blue shirt, and standing with folded hands.

“I hate the name Karachi. The city in Pakistan is a hub of terrorists. You can name your ancestors in the banner… I pay my respects to them. You came from Pakistan but this is your home. You’ll have to do it (change the name). We will help you with the business. I will give you time… change the name to something in Marathi,” the Sena leader is heard saying in the clip. It’s not clear when the video was shot.

He then turns to the camera and says the owner agreed to his demand.

According to news agency ANI, the shop has covered its banner with a newspaper after the visit by the Sena leader. Visuals showed the shop, decorated apparently for Diwali, with the banner covered and some people standing outside.

The Sena leader’s clip triggered sharp reactions on social media. “This is distasteful,” wrote one user. Another user called for action against Mr Nandgaonkar.

“All that the Sindhis have is the memory of the names of places that were once theirs. Don’t take that away … ,” read a post.

This is blatant ‘Dadagiri’, by the Shiv Sena and a crying shame.

Sindhis took refuge in Mumbai, during the partition and ‘Karachi’ is part of common shared heritage of humanity, not just us Indians.

The kind of people that Congress supports!
The family of Karachi Sweets are Hindus from Sindh & came to Mumbai as refugees post partition
Illiterate people like Nandgaonkar now want to erase their ancestry after they lost their native place.
Disgusting. https://t.co/8CJ6IAQ3q6

Some attacked the Congress, which is Sena’s ally in Maharashtra. “The kind of people that Congress supports! The family of Karachi Sweets are Hindus from Sindh & came to Mumbai as refugees post partition,” wrote AAP worker Aditya Paul.