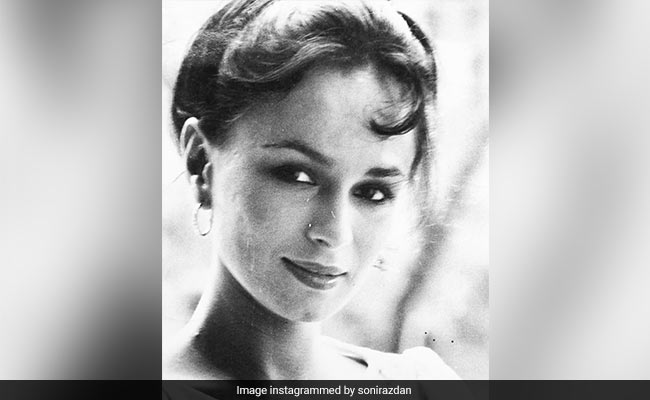 Soni Razdan, on Tuesday, struck gold in her throwback photo album and shared a million-dollar picture of herself on her Instagram profile. However, on her post, her daughter and actress Alia Bhatt’s comment stole the spotlight. In the black and white picture, Soni Razdan looks young and stunning as she poses for the camera. Reacting to her post, Alia Bhatt commented: “Stunning mommy” with heart emojis. Shaheen Bhatt also left heart icons in the comments section for her mom. Riddhima Kapoor Sahni, whose brother Ranbir Kapoor is dating Alia Bhatt, also reacted to the throwback photo with a heart emoticon.

And here’s what Alia, Shaheen Bhatt and Riddhima commented:

We have picked a couple of more throwback pictures of Soni Razdan that she has shared till now for you, take a look:

Soni Razdan married filmmaker Mahesh Bhatt in 1986. The couple welcomed Shaheen in 1988 and Alia in 1993. Mahesh Bhatt was previously married to Kiran, with whom he has a daughter, filmmaker-actress Pooja Bhatt.

Soni Razdan has featured in a number of films such as such as Trikaal, Page 3, Khamosh, Monsoon Wedding, 36 Chowringhee Lane, Ahista Ahista, Khamosh, Gumrah, Saathi, Shootout at Wadala, Yours Truly and The Verdict – State vs Nanavati. She was last seen in Hrithik Roshan’s War.