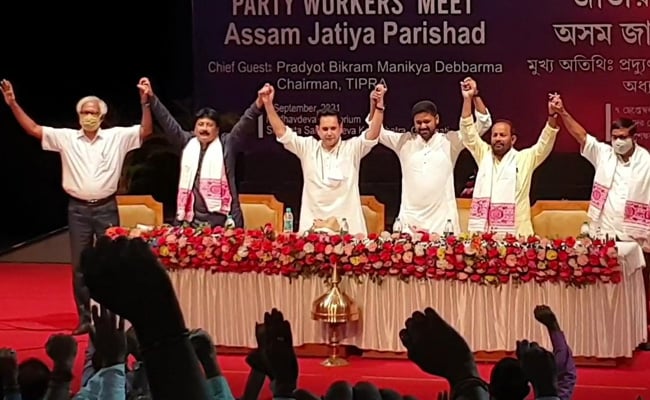 A new political initiative was today launched in the northeast aimed at taking on the BJP’s might in the region. The grouping, the first two constituents of which are The Indigenous Progressive Regional Alliance (Tipra) and the Assam Jatiya Parishad (AJP), is yet to be named.

Tipra Chairman Pradyot Manikya Debburman, head of the Tripura royal family, is spearheading the new platform. He said it was open to allying with West Bengal’s ruling Trinamool Congress for the 2023 polls in his state.

AJP President Lurinjyoti Gogoi said the new platform aimed to strengthen the regional political movement of the northeast. The final decision on this front, he said, will be announced soon after a dialogue with all regional parties.

The launch assumes significance given that the BJP and its allies control governments in all eight states in the region through the North-East Democratic Alliance (NEDA), a political coalition formed in 2016.

“The whole of northeast is now ruled by one party…the BJP and its allies. The allies of the BJP are not happy. You have seen what has happened in Assam and Meghalaya as well,” the Tipra Chairman said in Guwahati today.

“The idea is to form a pivotal platform that speaks in the voice of the northeast not the language of Delhi.”

Mr Debburman claimed to be in talks with many NEDA partners — the IPFT in Tripura and other outfits in Assam, Meghalaya, and Mizoram — as “their issues are not addressed”. He dubbed NEDA “only an election-winning machine”.

Addressing a bunch of AJP leaders and supporters in Guwahati today, Mr Debburman referred to the potential for an alliance with the Mamata Banerjee-led party.

“The Trinamool has to give it to us in writing that they would support our demand of a Greater Tipraland in Parliament. No one is untouchable in politics. Even the Congress is not untouchable,” he said.

Tipra and AJP put forward the primary demands for the new initiative. These include the immediate repeal of the Citizenship (Amendment) Act, updating the National Register of Citizens, ensuring constitutional provisions for the protection of Tripura’s indigenous identities and cultures, and the formation of Tipraland or Greater Tripraland.

“The people of Northeast are realising and even paying for the…BJP’s aggressive agenda in order to strengthen their foothold in the Northeast…they are trying to implement their concept of Hindutva which is different from the old traditions of Hinduism based on love and compassion,” said Mr Gogoi.

“As a result, many ethnic traditions and languages have become either extinct or endangered.”