Farmers’ protests over the hurriedly passed Farm Bills in the Lok Sabha’s monsoon session have been brewing since September. The union government made half-hearted attempts to engage their leaders, failing initially when farmers’ representatives objected to being received by bureaucrats and not the concerned minister. The distrust level worsened after the Akali Dal’s sole cabinet representative, Harsimrat Badal, resigned. Most saw it as the Akalis belatedly trying to retrieve their falling credibility amongst their core rural base.

The present “invasion” of the capital by farmers of Punjab, Haryana and Uttar Pradesh is the latest chapter in a face-off that the Modi government had taken lightly. Although a complete volte face by Delhi is not easily achievable, statesmanship and an empathetic assessment of factors driving rural rage is still possible.

The background to the fracas is as follows. The Agriculture Prices Commission (APC) was set up in 1965 to address the chronic shortage of food grains and fluctuation in their prices. The Green Revolution that followed rested on luring farmers to grow high-yielding varieties of wheat and rice, in combination with mechanisation and fertiliser-cum-pesticide use. For this, the Minimum Support Price (MSP) mechanism was devised to assure price support to the farmers’ output. It caused the miracle of food self-sufficiency in a nation ravaged for centuries by famines after failed monsoons. 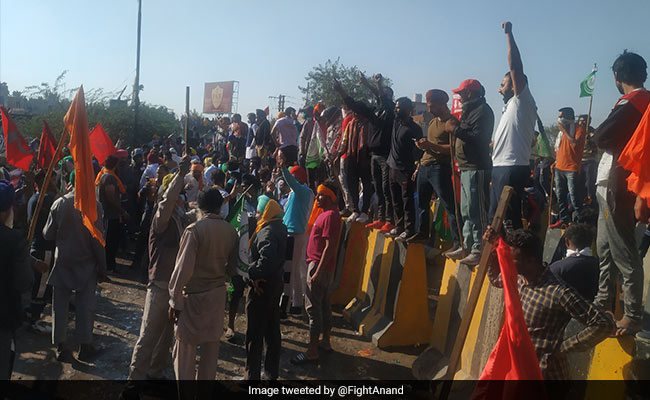 The present “invasion” of the capital by farmers of Punjab, Haryana and Uttar Pradesh is the latest chapter in a face-off that the Modi government had taken lightly.

But in recent decades, the MSP scheme has created a wheat-rice cycle in states like Punjab and Haryana, where traditionally rice was not grown due to its excess water need. Their governments’ food godowns have been overflowing with stocks for years. It is undoubtedly sensible for any government to break this cycle and have farmers diversify their crops and adopt a new pattern that is economically and ecologically more sustainable. For instance, the water table in Punjab is not only dropping dangerously fast but also getting leached with run-off chemicals. The lingering river water dispute between Punjab and Haryana is a spin-off from this monetary gain that farmers are addicted to from the extra rice crop.

But the devil, as they say, lies in the detail. The union government’s proclivity to implement big ticket and revolutionary schemes without adequate preparation had already been witnessed in case of demonetisation and GST regime. In the case of agriculture, the leap towards reform has been equally precipitate and ill-timed. Perhaps the government felt the raging pandemic would keep farmers from gathering and agitating. Obviously, it miscalculated the depth of rural ire and frustration. This was inevitable as no serious debate took place in parliament, nor was the matter referred to a parliamentary committee for weighing its pros and cons.

The contemporary agricultural dilemma, as the NSSO survey of 2014 surmised, flows from the fragmentation of holdings and the dominance of marginal and small farmers (86.8% of the total) with less than one hectare farms. However, any change cannot be wished into existence by simply deconstructing the existing market and mandi system. Punjab, for instance, has 22,000 registered commission agents servicing 5.5 lakh farmers. They are more than money-lenders or crop-purchasers. They are a part of the socio-economic system of Punjab’s rural economy, providing help and advice to farmers. At one go, the union government has destroyed this rural compact without outlining how the transition is to be made to a new order and what safety provisions the farmers can count on.

Additionally, taking the example of Punjab, it earned last year Rs 3,642 crores as fees from grain purchasers. This went into the Rural Development Fund (RDF) for the upkeep of rural infrastructure like roads, bridges etc. Thus, the union government has picked a subject like agriculture, allocated to states under the constitution, and affected by its legislation the vital income of states. This is an attack on India’s federal system, as no compensation to affected states is envisaged.

What then are farmers fearing, and what assurances, if any, may allay their concerns? One, the government should go beyond giving verbal assurances that MSP shall continue to be paid. They need to write it down. The farmers fear that the government plans to gradually stop buying their crops and allow market forces, in the shape of a handful of billionaires diversifying into food retail, to bring them to their knees. In the name of reform, they see laissez faire of the 19th-century European brand. Two, they are concerned about the government not revealing any road-map to guide Indian agriculture from monoculture and the high input-dependent current scheme to ecological diversification with lentils, fruits, vegetables, aquaculture, etc or even organic farming. Nor is any plan presented as to who will create the new infrastructure and supply chains.

Farmers’ protests or agricultural subsidies are not just a developing world malaise. In 2019, French farmers clogged Parisian and national highways as they felt their livelihoods threatened. In 2017, the total support for agriculture in OECD nations was $315.5 billion. In India, Madhya Pradesh, Haryana, Telangana have experimented with Deficiency Price Payment with variable success. The schemes involve compensating farmers if their sale in markets falls below the estimated fair price. The union government has left farmers with vague promises of MSP and the coffers of states depleted. This is no way to treat those that rescued India from chronic food shortages, making Prime Minister Lal Bahadur Shastri equate them with the nation’s other defenders in his slogan: “Jai Jawan, Jai Kisan.”

(The writer is a former ambassador to Iran.)