Pics From Nayanthara’s Birthday Celebrations Are Sugar, Spice And Everything Nice – Unblendednews
Skip to content
Movies 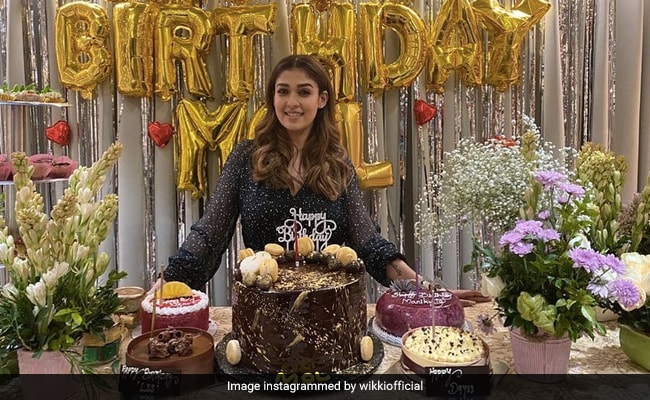 For south star Nayanthara, her family planned a surprise birthday party on Wednesday. The actress turned 36 yesterday. Her birthday celebrations had not one, not two but five cakes. Pictures from the surprise party were shared on social media by Nayanthara’s boyfriend, director Vignesh Shivan, on Wednesday evening and they have been trending since then. In the photos, Nayanthara looks stunning as ever in a black layered midi dress. She paired her outfit with aqua blue stilettos. The whole room in the pictures can be seen filled with white and yellow balloons with floral decor all over the place. In one of the images, Nayanthara can be seen happily posing with her birthday cakes.

Sharing the photos, Vignesh Shivan, who couldn’t make it to the party, wrote: “How sweet! Such a lovely surprise from Amma, Appa and Lenu Kurian, the sweetest bro possible. Our dearest chaach. Missed being around, yet happy.”

Here are the trending photos from Nayanthara’s birthday celebrations. They are sugar, spice and everything nice.

Earlier on Wednesday, Vignesh Shivan wished Nayanthara with an adorable birthday post featuring her pictures from their Los Angeles trip. “Happy birthday to you, Thangamey,” he wrote in the caption.

On Nayanthara’s birthday, the makers of her forthcoming film Netrikann also dropped its teaser on the Internet. Netrikann, directed by Milind Rau and produced by Vignesh Shivan, is a remake of Korean film Blind.

Nayanthara’s first look poster from her new film Nizhal was also released on her birthday. Take a look:

Nayanthara will also be seen alongside Rajinikanth in Annaatthe.