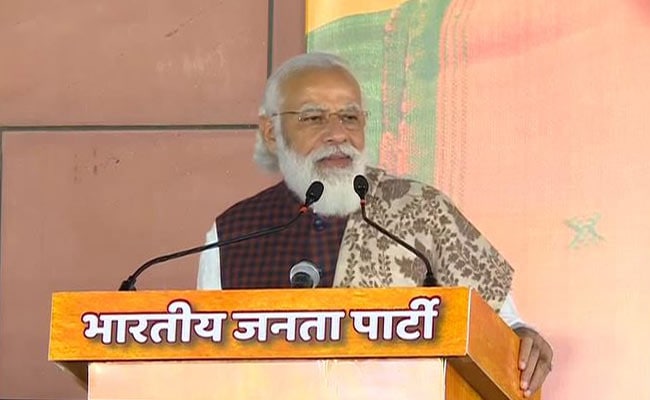 PM Modi, Amit Shah and other BJP leaders will be in Hyderabad to campaign for local polls. (File)

Something unprecedented is happening in Hyderabad. Prime Minister Narendra Modi, Amit Shah, BJP chief JP Nadda and other top leaders of the BJP are all set to land in the city to campaign for local polls that have consumed the ruling party’s attention and resources like never before.

The Greater Hyderabad Municipal Corporation (GHMC) polls are due on December 1. From the Prime Minister to the home minister, other union ministers and Chief Ministers, the BJP has called in the cavalry.

All this for a local body election that will decide the Mayor of Hyderabad city. In the last municipal election, the BJP had managed to win just four of the city’s 150 wards. Chief Minister K Chandrasekhara Rao’s Telangana Rashtra Samiti (TRS) won a comfortable 99 and Asaduddin Owaisi’s AIMIM won 44. The Congress managed two wards and the TDP, one.

What changed so dramatically for the BJP in the last four years?

The answer is linked to the BJP’s recent win in bypolls in the state’s Dubbaka constituency, which has always been a stronghold of Mr Rao, aka KCR. The BJP won by 1,000 votes.

In this victory, the party sees signs of its rising stock in Andhra Pradesh.

In the 2018 assembly election, the BJP managed just one seat in the state, Goshamahal. The parliamentary election last year gave them four out of the 17 Lok Sabha seats in Telangana, which greatly boosted their confidence. In subsequent zila parishad elections and bypolls, they made no dent.

Until the Dubbaka win opened up a world of possibilities. Their confidence has been further bolstered by the fact that state finance minister Harish Rao, considered the TRS’s master poll strategist and chief election winner, was in charge of Dubbaka but failed.

Sources say the BJP is pushing hard because it senses an opportunity in Telangana and a vacuum in the opposition space. After the bifurcation of the state, the Congress, decimated in Andhra Pradesh, was considerably weakened in Telangana in the 2014 elections.

Even after the 2019 election, many of Congress’s winners switched to the TRS. The party was virtually decimated.

Eager to increase its footprint in the south, the BJP sees the Hyderabad municipal election as its gateway beyond Karnataka, the only southern state where it is in power.

Sources in the BJP say they have noticed a huge political opportunity in perception surveys carried out even before the Dubbaka bypolls.

In the past two days, the party’s firebrand MP Tejasvi Surya has delivered hugely controversial speeches in which he has called Asaduddin Owaisi an avatar of Mohammad Ali Jinnah. He also accused Mr Owaisi of bringing to Hyderabad “Rohingya Muslims instead of development”.

Mr Owaisi shot back at a public meeting: “These people need to have some biryani which will bring them back to their senses.”

BJP state president and MP from Karimnagar, Bandi Sanjay Kumar, said during a roadshow in the old city that his party would conduct a “surgical strike to flush out Rohingya and Pakistanis living there”.

The BJP leader accused the TRS and AIMIM of trying to win the civic polls with the “illegal votes of Rohingya, Pakistanis and Afghanistanis”.

With the campaign swirling around Pakistan, surgical strikes and biryani, the stakes are high in Hyderabad’s local polls.