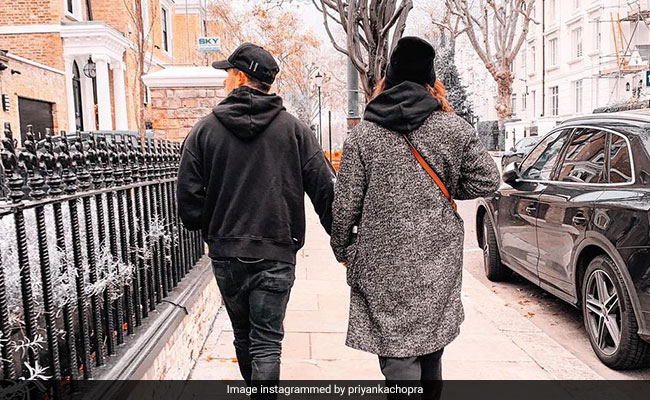 Priyanka Chopra and Nick Jonas are too cute. The couple, who celebrate their second wedding anniversary today, posted loved-up pictures with each other on their respective social media profiles. The actress, who is currently in London for her next project, shared a picture of herself strolling down the streets of London with the love of her life – her husband Nick Jonas. She captioned the post: “Happy 2 year anniversary to the love of my life. Always by my side. My strength. My weakness. My all. I love you.” Nick Jonas wished Priyanka by sharing pictures from their wedding ceremony and he wrote on his caption: “Two years married to the most wonderful, inspiring and beautiful woman. Happy anniversary, Priyanka Chopra. I love you.”

This is what Nick Jonas posted:

Priyanka Chopra married Nick Jonas in a Christian and a Hindu ceremony in Jodhpur’s Umaid Bhawan Palace on December 1 and 2 in 2018. The couple later hosted receptions in Delhi and Mumbai. They first met at the 2017 Met Gala.

Priyanka Chopra, a former Miss World and a Bollywood star, is a woman of many hats. She is the first South Asian woman to headline the cast of an American television show and has featured in many Hollywood projects. Priyanka Chopra is a tech-investor and also counts as a UNICEF Goodwill Ambassador. In terms of her films, her last project was The Sky Is Pink, co-starring Farhan Akhtar and Zaira Wasim. Her upcoming projects are The White Tiger, co-starring Rajkummar Rao. She will also be seen in We Can Be Heroes and a film with comedian Mindy Kaling, Amazon’s Citadel and Sangeet Project. The actress recently announced a Hollywood film with Sam Heughan and Celine Dion.