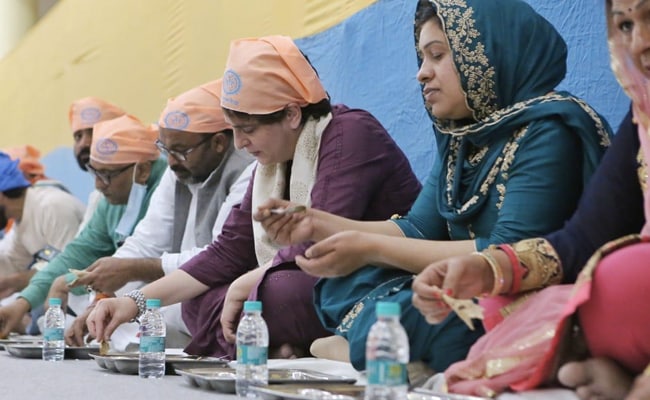 The Ravidas sect has lakhs of followers spread across north India.

Priyanka Gandhi Vadra on Saturday visited Varanasi on the occasion of Sant Ravidas’ birth anniversary. The Congress general secretary, who has been entrusted with reviving the party in Uttar Pradesh before next year’s assembly elections, met with Sant Niranjan Maharaj at the city’s Gowardhan Ravidas temple.

The Ravidas sect has lakhs of followers spread across north India.

Ms Vadra, the Congress’s in-charge for Uttar Pradesh, has been visiting the state frequently to drum up support for the party ahead of the polls.

Earlier this month, she visited Prayagraj twice. On her first visit, she took a holy dip and a boat ride. During her second visit last week, she interacted with the sizeable Nishad community.

“The Nishad community’s life is linked to rivers, they understand the pain of rivers…Like the agriculture laws are for some billionaires, the UP government is for the sand mafia,” she had said, promising that the Congress will raise their issues in parliament.

She has also been addressing mahapanchayats or farmers’ meetings against the Centre’s three agriculture laws. “The three laws are demonic. If voted to power, the Congress will scrap these laws,” she said earlier this month.