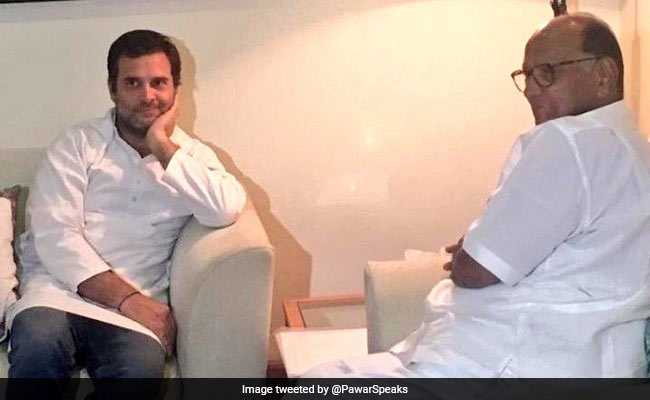 Rahul Gandhi has faced fledgling resentment within the Congress in recent months. (File)

Former Congress chief Rahul Gandhi appears to lack the “consistency” needed to be accepted by the country as its leader, the party’s ally has in Maharashtra, Nationalist Congress Party (NCP) chief Sharad Pawar, said on Thursday.

“There are some questions in this regard. There seems to be less consistency,” Mr Pawar said when asked if the country was ready to accept Rahul Gandhi as the leader, at an event organised by Marathi newspaper Lokmat, according to news agency PTI.

Mr Obama, in his recently published memoir ‘A Promised Land’ said that the Congress leader had “a nervous, unformed quality” and appeared to be like a student eager to impress the teacher but lacking aptitude and passion to master the subject.

Asked about this, Mr Pawar said it was not necessary to accept everyone’s view.

Asked about the Congress’s future and if Rahul Gandhi was becoming a “hurdle” for the party, Mr Pawar said the leadership of any party depends on what kind of acceptance he or she has within the organisation.

“Though I had differences with (Congress chief) Sonia Gandhi and the family, even today Congressmen have a sense of affection for the Gandhi-Nehru family,” the NCP chief, who quit the Congress over the leadership issue two decades ago, said.

Rahul Gandhi, who quit as leader of the Congress after the second consecutive debacle against Prime Minister Narendra Modi’s BJP in national elections last year, has faced murmurs of dissent within the party in recent months that have been bolstered by last month’s disastrous Bihar results.