Realme’s foray into audio started with the basics; the affordable wired Realme Buds wasn’t the most impressive offering in its segment even back then, but it was a reasonable first attempt from a company that only started selling smartphones in India in 2018. Since then, Realme has launched many more models, including wired, wireless, and true wireless headsets. The Realme Buds Air Pro is its most expensive pair of earphones yet. 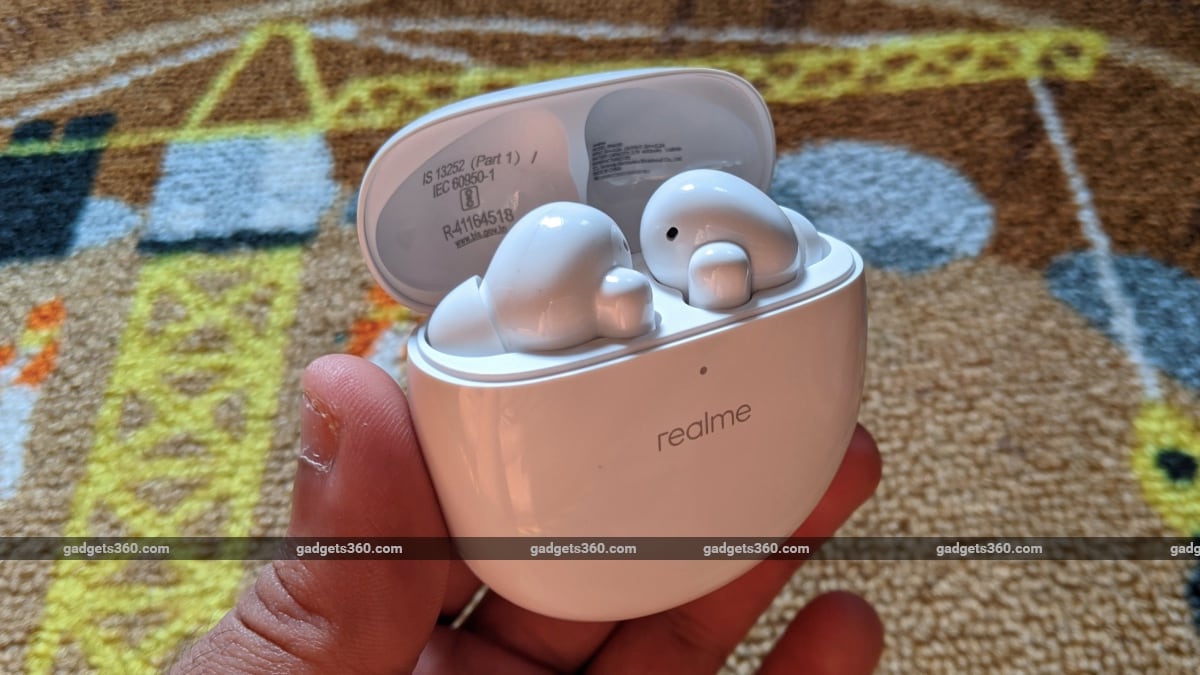 Lots of features in the Realme Buds Air Pro

The charging case is a bit larger and nicer looking than what I’ve seen on earlier Realme true wireless headsets. The earphones latch into the case and the lid snaps shut magnetically. The easy-to-miss pairing button is on the right side, while an indicator light at the front tells you the charge status of the case itself.

Each earpiece has three microphones – two for active and environmental noise cancellation, and one to capture your voice on calls. The earphones are IPX4 rated for water resistance, and are powered by 10mm dynamic drivers. For connectivity, the headset uses Bluetooth 5 with support for the SBC and AAC codecs. There is also a super-low-latency mode, which Realme claims can bring down the audio delay to 94ms.

There are touch sensors on the outer part of each earpiece, and the Realme Buds Air Pro recognises simple tap-based controls. These can be customised through the Realme Link app for Android. Although I did occasionally have misfires, the tap controls usually worked well for me. You can assign four different functions to the double-tap and triple-tap gestures on either side, including the ability to control playback, cycle through noise control modes including ANC and hear-through, invoke the default voice assistant on your smartphone, or deactivate the gesture.

The app also lets you see the battery level of each earpiece and the case, change the noise control mode, and activate one of the three special modes – Game, Volume Enhancer, and Bass Boost+. You can also update the firmware for the earphones, if or when updates are made available. The app worked well for me, but I didn’t need it for much beyond the initial setup of the headset.

The key addition that sets the Realme Buds Air Pro apart from the rest of the company’s true wireless product range is active noise cancellation. There is also support for Google Fast Pair, and once connected and linked to your Google account, you can check the battery levels of the earphones and case through a pop-up display on the Android system itself, which can be seen in your notification shade. This pop-up shows up every time the earphones are connected to the smartphone.

You get a total of four pairs of ear tips in the box, along with a USB Type-C cable for charging. The case supports fast charging for a claimed three hours of playback time from 10 minutes of charging. I was able to fully charge the earphones and case in about two hours. The earphones ran for around four hours per charge with active noise cancellation usually enabled and with music playing at moderate volumes. The charging case added three full charges to the earphones, for a total battery life of around 16 hours per charge cycle.

Some pretty impressive true wireless headsets have launched over the last couple of months, including the Huawei FreeBuds 3i and Oppo Enco W51, that have pushed the boundaries of what’s possible on a budget. With the Buds Air Pro, Realme joins this group in producing true wireless earphones that truly defy expectations attached to the price. This is a capable pair of earphones with good sound, decent active noise cancellation, and worthwhile features, all at a very good price. 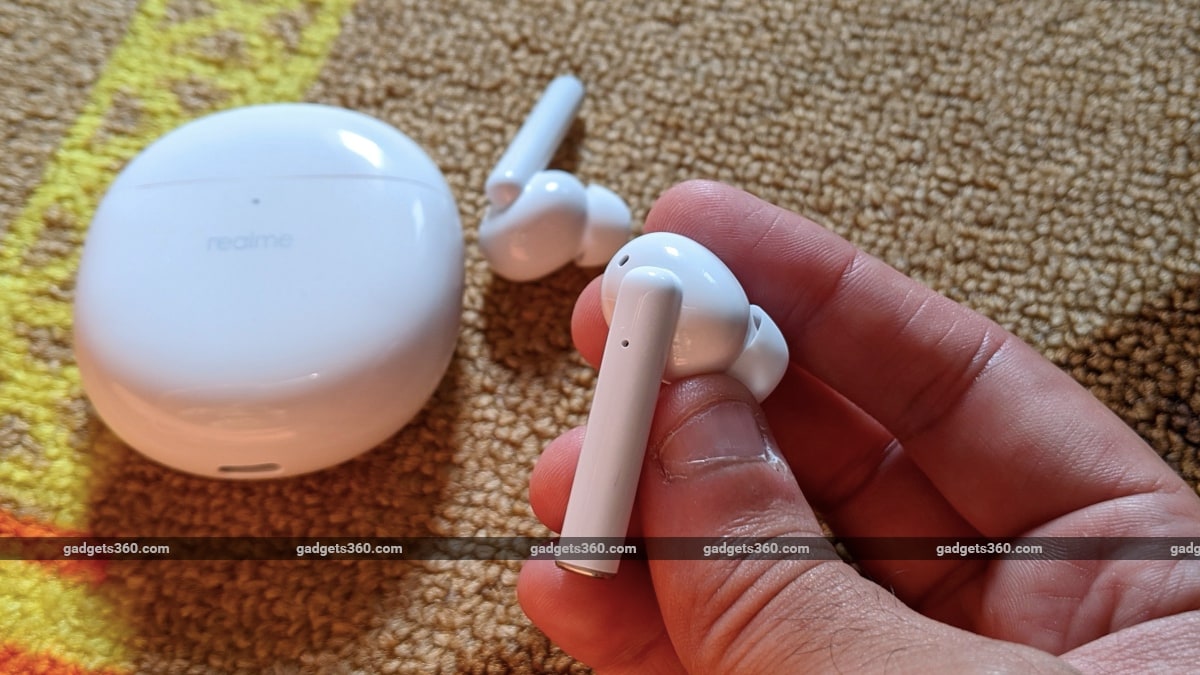 The earphones have touch controls, which are customisable through the Realme Link app

Although not quite as detailed-sounding as the Oppo Enco W51, the Realme Buds Air Pro is a comfortable, easy-going pair of earphones. The sound was clean, entertaining, and free of irritations. I used my OnePlus 7T Pro McLaren Edition to test the Realme Buds Air Pro, with Spotify, YouTube Music, and Tidal to stream music over the AAC Bluetooth codec.

Starting with Tidal Masters, the Realme Buds Air Pro sounded decent enough, but didn’t seem to be putting the excellent audio stream quality to any real use. The sound was clean and enjoyable, but the level of insight and detail that the Lypertek Tevi can bring out with this same track and streaming service was missing.

Even compared to the similarly positioned Oppo Enco W51, the Realme Buds Air Pro wasn’t doing too much to draw out the detail and definition in the Tidal Masters tracks; Supalonely by Benee sounded just the same as when playing a lower quality stream on Spotify, with a safe sonic signature. The catchy beat was enjoyable, with strong bass response, comfortable mids and highs, and enough detail to make this a pleasant pair of earphones to listen to.

While there was some detail to be heard in the sound, it wasn’t a vast amount; instead, I could hear small hints of definition and detail rather than the more natural and balanced approach that the Oppo Enco W51 and Lypertek Tevi bring to the music. Switching to compressed audio on Spotify retained the decent soundstage and the level of detail, suggesting that the Realme Buds Air Pro is being held back by its drivers and tuning, rather than codec support.

Active noise cancellation on the Realme Buds Air Pro is decent for the price, offering slightly better performance than on the similarly priced Oppo Enco W51. This is still budget performance, offering an audible reduction of most background sound, but the ANC isn’t as intelligent and sensitive to changes in the environment as on more expensive pairs of headphones. 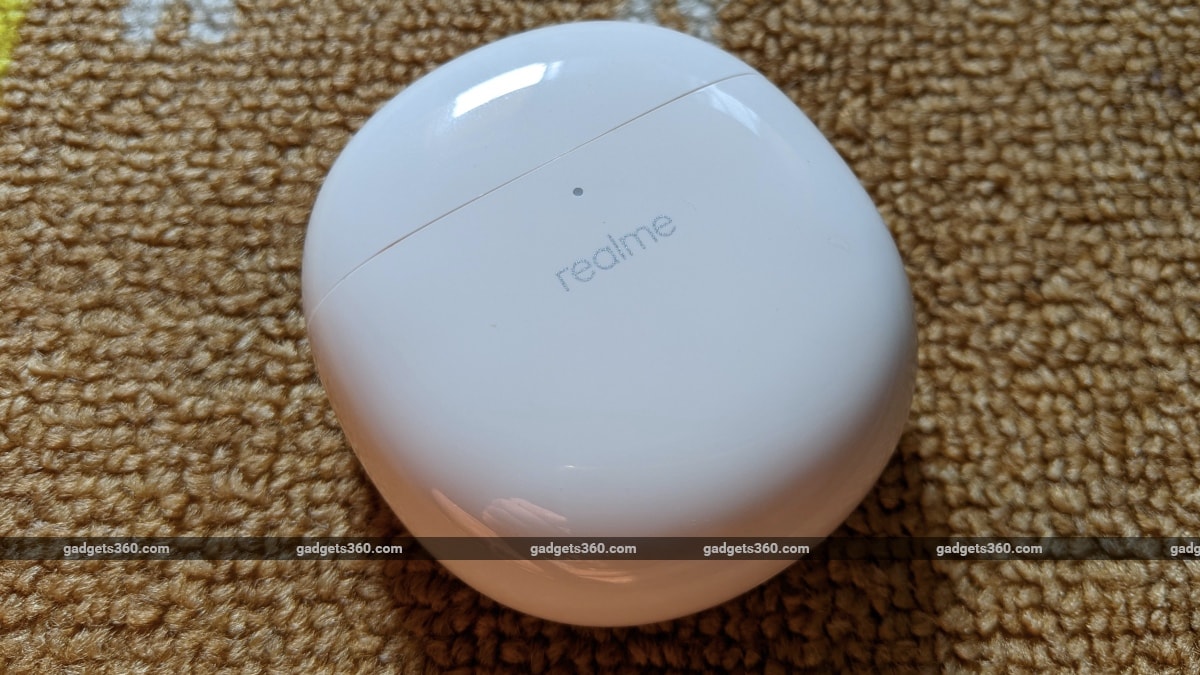 The charging case has a USB Type-C port

These earphones tended to reduce low-end frequencies more than high-frequency ones. This was particularly evident with a cleaning robot; the low rumble of the air exhaust was made quieter, but the high-pitched whirring of the suction motor didn’t seem to be affected at all.

There is also a transparency mode, which sounded very natural to me. It didn’t completely open up the microphones, only allowing a bit of sound in for a natural ambient listening effect. Gaming mode worked well in terms of a noticeable reduction in latency (at the slight cost of detail), and the Realme Buds Air Pro also performed well on voice and video calls.

Realme’s slow and calculated approach to the audio segments it enters has finally come to fruition with the Buds Air Pro. This is a good pair of true wireless earphones that offers a lot for the price, and unlike most of Realme’s earlier audio products, has no significant drawbacks. It’s a well-designed, feature-filled headset, and sounds decent as well.

If you’re looking for a good pair of true wireless earphones for less than Rs. 5,000, the Realme Buds Air Pro is among the best you can buy from an all-round perspective. Although it isn’t exceptional in any single way, it offers capable and entirely functional performance overall, including sound quality, ANC, and battery life. The Oppo Enco W51 may sound a bit better at the same price and does also support wireless charging, but the Realme Buds Air Pro offers better app support, features, and active noise cancellation, making this a worthwhile alternative.

Which are the best truly wireless earphones under Rs. 10,000? We discussed this on Orbital, our weekly technology podcast, which you can subscribe to via Apple Podcasts, Google Podcasts, or RSS, download the episode, or just hit the play button below.

Affiliate links may be automatically generated – see our ethics statement for details.