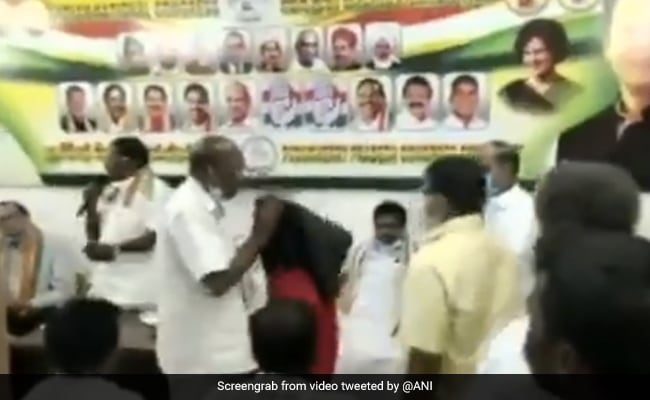 There was ruckus at the Puducherry Congress headquarters as a section of the cadre protested against the party giving away more seats for their ally in a Congress stronghold.

A section of workers including a special invitee, Venkatesan, created a stir displaying a DMK flag in the presence of former chief minister Narayanasamy and senior leaders including Digvijaya Singh, who had come for interviewing candidates for the April 6 election. The leaders had a tough time pacifying workers.

The Narayanasamy government in the Union Territory fell last month after six MLAs resigned and two of them including Namassivayam, the former Congress chief in Puducherry, joined the BJP. The party is yet to announce its candidates.

In a swift turn of events, the BJP, which has no elected members and only three nominated MLAs, cobbled an alliance by taking help from All India NR Congress, led by former chief minister N Rangaswamy as the lead partner along with AIADMK. No chief ministerial candidate has been announced yet.

In Tamil Nadu, the DMK has allotted Congress 25 assembly seats and a Lok Sabha seat for Kanniyakumari bypoll.