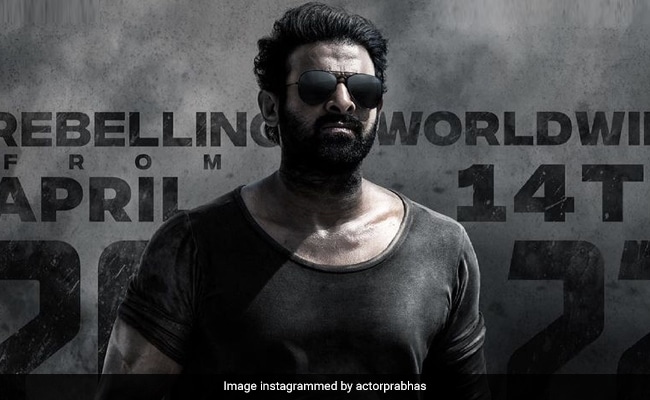 Salaar: Prabhas in the film.(courtesy actorprabhas)

The makers of Salaar shared an update on the film on Sunday. The film starring Prabhas and Shruti Haasan, is slated to release on April 14 in cinemas, next year. Prabhas, who stars in the lead role in the film, shared a brand new poster from the film on social media. In the poster, Prabhas sports an intense look. The actor can be seen wearing a pair of sunglasses as he looks at the camera. Sharing the update on the film, Prabhas wrote in his caption: “Delighted to share the release date of Salaar… 14th April 2022. See you in cinemas.” He added the hashtags #Salaar14Apr22 to his post.

Salaar will be directed by Kannada hit KGF‘s director Prashanth Neel. The film is going to be an action saga and it will be produced by KGF producer Vijay Kiragandur. The actor announced his association with the project with these words: “Today I take a leap into the world of Salaar. An Indian film by Hombale Films.” The text on the poster read: “The most violent men… Called one man… The most violent. Prabhas in and as Salaar.”

Prabhas, known for his work in SS Rajamouli’s Baahubali series of films, has a super busy schedule ahead. Other than Salaar, the star will be seen alongside Deepika Padukone in Nag Ashwin’s next. He has also Radha Krishna Kumar’s Radhe Shyam, co-starring Pooja Hegde in the line-up. Prabhas will also feature in Om Raut’s Adipurush, co-starring Saif Ali Khan. The actor was last seen in the 2019 action-thriller Saaho, in which he co-starred with Shraddha Kapoor.