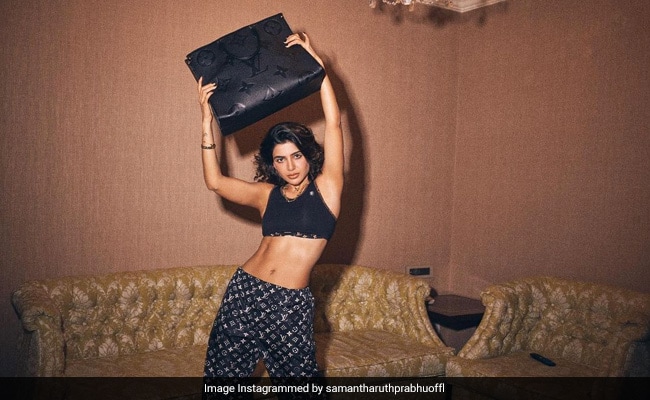 Samantha Ruth Prabhu, being her stunning self, shared a set of pictures from a recent photoshoot that she did for the haute brand Louis Vuitton and she looks fabulous as ever. The actress, for the shoot, picked printed pants that she topped with a black bralette of sorts. Samantha accentuated the look with a black Louis Vuitton bag. She added a black heart emoji to the post. Designer Masaba Gupta commented her post: “Wow Samantha you look insane. What is this body.” Another comment read, “What are those crazy abs. Cannot process.” Actress Raashii Khanna dropped fire emojis in the comments section. So did many others. Singer Chinmayi Sripada wrote: “Wowwwwwwwwwwww.” Actress Nisha Aggarwal added, “Look at those abs.”

Samantha Ruth Prabhu made her big digital debut with The Family Man 2 and she is making headlines for her role as Raji, an unwavering Sri Lankan Tamil liberation fighter on a suicide mission in the series. The Family Man 2 opened to stellar reviews and is streaming on Amazon Prime Video. Both Manoj Bajpayee and Samantha Ruth Prabhu received massive praise for their performances in the series.

Samantha Ruth Prabhu has starred in films such as Ye Maaya Chesave, Rangasthalam, Neethaane En Ponvasantham, Yeto Vellipoyindhi Manasu, Seethamma Vakitlo Sirimalle Chettu, Majili (in which she co-starred with her husband Naga Chaitanya), Jaanu and Oh! Baby. She will next be seen in Kaathuvaakula Rendu Kaadhal and Shaakuntalam.