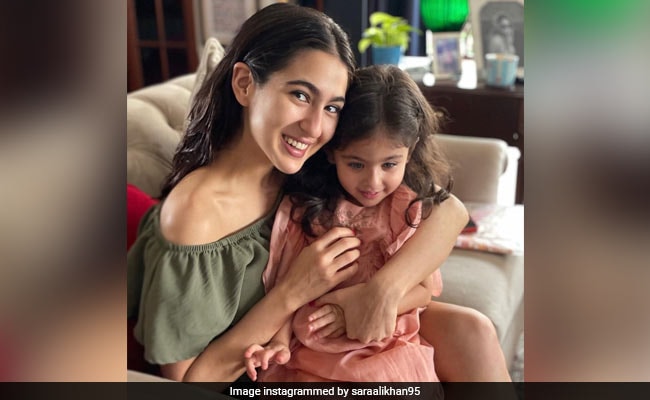 Sara Ali Khan, who is quite active on social media and often shares pictures with her family members, added another one to her collection and this one is super cute. The actress, on Saturday night, added some adorable pictures with her cousin Inaaya Naumi Kemmu sitting pretty on her lap. Both Sara and Inaaya can be seen smiling with all their hearts as they pose for the camera. The Simmba actress accompanied her post with an equally cute caption that read, “Sister to sister we will always be, a couple of nuts off the family tree.” She added the hashtags #Sisters, #cutest and #family. The comments section of Sara’s post was filled up with remarks like “cutest” and “so much gorgeousness.”

Inaaya Naumi Kemmu is the daughter of Sara’s aunt and actress Soha Ali Khan. Soha and Kunal Kemmu  got married in 2015 after dating for a few years and they welcomed Inaaya Naumi two years later in September 2017. The couple have co-starred in films such as 99 and Dhoondte Reh Jaaoge.

Sara is the daughter of Bollywood actors Saif Ali Khan and Amrita Singh.  Her father Saif Ali Khan is now married to actress Kareena Kapoor. Saif and Kareena recently welcomed their second child together – a baby boy. They are also parents to 4-year-old Taimur.

Sara Ali Khan stepped into Bollywood in the year 2018 with the film Kedarnath, opposite late actor Sushant Singh Rajput. She has starred in films such as Simmba, co-starring Ranveer Singh and Love Aaj Kal with Kartik Aaryan. Sara’s upcoming project is Atrangi Re, co-starring Akshay Kumar and Dhanush. She was last seen in Coolie No 1 remake, co-starring Varun Dhawan.