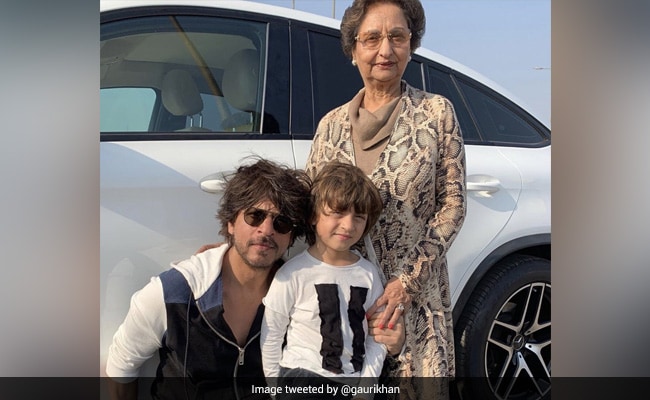 Gauri Khan posted the most adorable birthday greeting for her mother Savita Chhibber on social media. However, it was her husband Shah Rukh Khan’s reaction to the post that has our heart. Gauri Khan posted a video of her mother Savita Chhibber dancing to the track Daddy Cool with a bright smile on her face. “There’s no one who can match your steps… Happy Birthday Mom,” read Gauri Khan’s caption. Later, SRK reacted to Gauri Khan’s tweet on Thursday afternoon and he wrote: “Hmmm need to take dancing lessons from mom in law.”

Shah Rukh Khan married Gauri Khan in 1991. The star couple are parents to Aryan, 23, (their eldest child), Suhana and 8-year-old AbRam. Aryan Khan graduated from University Of South California. Suhana (21) is pursuing her higher studies in New York, while AbRam stays with his parents in Mumbai.

In terms of work, Shah Rukh Khan was last seen in 2018 film Zero, co-starring Anushka Sharma and Katrina Kaif. He will next be seen in his much-awaited film Pathan, alongside Deepika Padukone. He has also co-produced Alia Bhatt’s Darlings, which marks her debut as a film producer.

Gauri Khan is an interior decorator and she owns the plush Gauri Khan Designs in Mumbai. She has given makeovers to several suburban Mumbai restaurants and celebrity homes over the years. She has redecorated homes for several Bollywood A-listers. She has designed restaurants like Arth and Sanchos. Other than that, she is a film producer and made her debut as an author with a book titled My Life In Design.