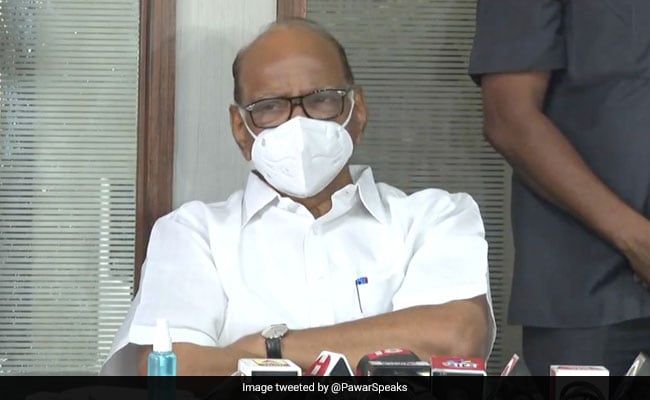 Veteran Maharashtra leader Sharad Pawar today put out a clarification as an old letter in which he — as Union Agriculture Minister — had sought reforms in the farm sector was called out by the ruling BJP.

Sharad Pawar had written to Chief Ministers like Sheila Dikshit (Delhi) and Shivraj Chouhan (Madhya Pradesh) asking them to amend the Agricultural Produce Marketing Committee (APMC) Act in their states, BJP leaders pointed out, as the letter was circulated online.

“I had said that APMC needs some reforms. The APMC Act should continue but with reforms. There is no doubt that I had written the letter. But their three Acts does not even mention APMC. They are just trying to divert the attention. There is no need to give importance,” Sharad Pawar said.

“Tomorrow five-six people from different political parties are going to sit, discuss and take a collective stand…We have a 5 pm appointment tomorrow with the President. We will present our collective stand before him,” Mr Pawar said.

Mr Pawar’s NCP, the Congress and many other opposition parties have backed the protests against three new laws that farmers fear will take away their earnings and leave them at the mercy of big corporates. The parties also backed the nationwide Bharat Bandh called today.

The BJP has accused Mr Pawar and the Congress of double standards.

Union Minister Ravi Shankar Prasad said: “Sharad Pawar is also opposing the new farm laws. But when he was agriculture minister, he wrote to all Chief Ministers for ‘private sector participation’ in market infrastructure.”

“The opposition parties are opposing the Narendra Modi government for the sake of opposition, forgetting their own work in the past. In its 2019 poll manifesto, Congress promised to repeal the APMC Act and make trade of agriculture produce, including export, free from all restrictions,” Mr Prasad said.

Farmers have been protesting on different borders of Delhi since November 26 against the three new laws the government says are aimed at reforms –Farmers’ Produce Trade and Commerce (Promotion and Facilitation) Act, the Farmers (Empowerment and Protection) Agreement on Price Assurance and Farm Services Act, and the Essential Commodities (Amendment) Act.

Talks between the government and farmers have failed to end the deadlock.